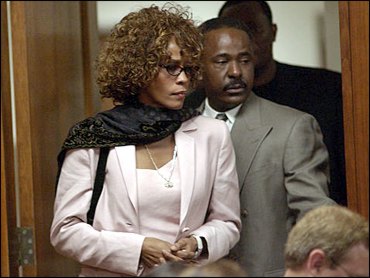 Fulton County police spokesman Kurtis Young said Brown, 34, turned himself in. Brown and Houston left Fulton County Magistrate Court together after they and their attorneys met with police.

Brown is scheduled to appear at a preliminary hearing Jan. 7.

Brown's lawyer, Maurice Bennett, told The Atlanta Journal-Constitution that his client and Houston were trying to work out the problem "as husband and wife."

Houston, 40, declined comment, but her lawyer, Mark Trigg, echoed Bennett's comments, saying: "She is trying to resolve the matter privately."

Houston told police Sunday that Brown had struck her on the left side of her face with an open right hand at the couple's home near Alpharetta. Brown then went to the airport for a flight to Los Angeles, the police report said.

Police said Houston had a bruised cheek and a cut inside her upper lip.

Simple battery is punishable by up to a year in jail and a $1,000 fine. Normally on a first offense in domestic violence cases, the charge is dismissed if the defendant undergoes counseling.

Brown served seven days in DeKalb County Jail in August for violating his probation for a 1996 drunken driving conviction. He also served 26 days in a Florida jail in 2000 for an earlier probation violation.

Houston and Brown have been married since 1992. They have a 10-year-old daughter, Bobbi Kristina.