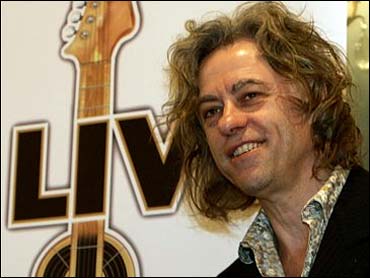 Bob Geldof took over for a day as the editor of Germany's biggest-selling newspaper, which appeared Friday with an impassioned front-page plea for the country's leaders to "end the misery" in Africa.

Geldof's turn in the chair at the mass-circulation Bild daily came as German Chancellor Angela Merkel prepares to host next week's Group of Eight summit in Heiligendamm, where she has pledged to make Africa a major issue.

Bild's front page carried a large picture of an emaciated child inside the outline of Africa. "End this! Now!" read the headline.

A front-page Geldof commentary told German leaders that "you can change things and people want you to. ... Do your job! End the misery, finally!"

Among other contributions: President Bush underlined his commitment to fighting HIV/AIDS in Africa and elsewhere, U2 singer Bono echoed Geldof's call for the West to help Africa and "Ocean's Thirteen" star George Clooney highlighted the violence in Sudan's Darfur region.

Geldof, 52, organized the Live Aid concerts in 1985 to benefit victims of famine in Ethiopia and the Live 8 concerts in 2005 for African debt relief. The former frontman of The Boomtown Rats has dedicated much of his career to advocating on behalf of humanitarian causes.

The paper also published a Geldof interview with Merkel, who pledged that "we will make progress in Heiligendamm that will move Africa forward."

In comments released before the paper's publication, Merkel said Germany's development aid for poorer countries would be increased by some $1 billion next year.