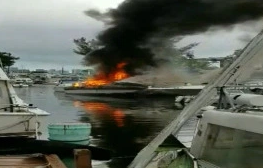 MIAMI -- Firefighters are investigating what led to a boat exploding in Miami. It happened at a marina at approximately 1:30 p.m. Monday afternoon, CBS Miami reports.

The explosion sent many people in the area running for safety.

A 24-foot boat called the Captain Jack caught fire in what witnesses described as an explosion, and then set another nearby boat ablaze as well.

"I see like a big explosion," said Felipe Francia, who was working on a boat right across the way at the time.

William Jackson was sleeping in the building right next to the marina.

"I heard like a boom," he said. "I thought somebody hit the wall. And the picture came off [the wall] and hit me on the top of the head."

Jackson came out and found people at the marina trying to use fire extinguishers on the flames, with little effect.

"There was a guy working on the boat and he said his boat just exploded," Jackson said. "He didn't get hurt at all. His boat there in the water."

The fire spread to a nearby 50-foot catamaran as heavy smoke blanketed the area. People called 911.

Some onlookers were critical of how long it took firefighters to arrive. The fire was practically out by the time a fire boat got to the scene. But the fire department defended its response.

"The response time was rather quick," Captain Ignatius Carroll with City of Miami Fire Rescue said. "But they have to understand maneuvering through an area that has a lot of stuff around it makes it difficult for the firefighters to get to it. Especially in an area that's filled with a lot of smoke."

Miami Fire Rescue estimates it took about 30 minutes to get the blaze under control.

In the end, two boats were badly damaged and a few others had some issues due to the heat. But no one was hurt.

Fire investigators are looking into the cause of the incident.