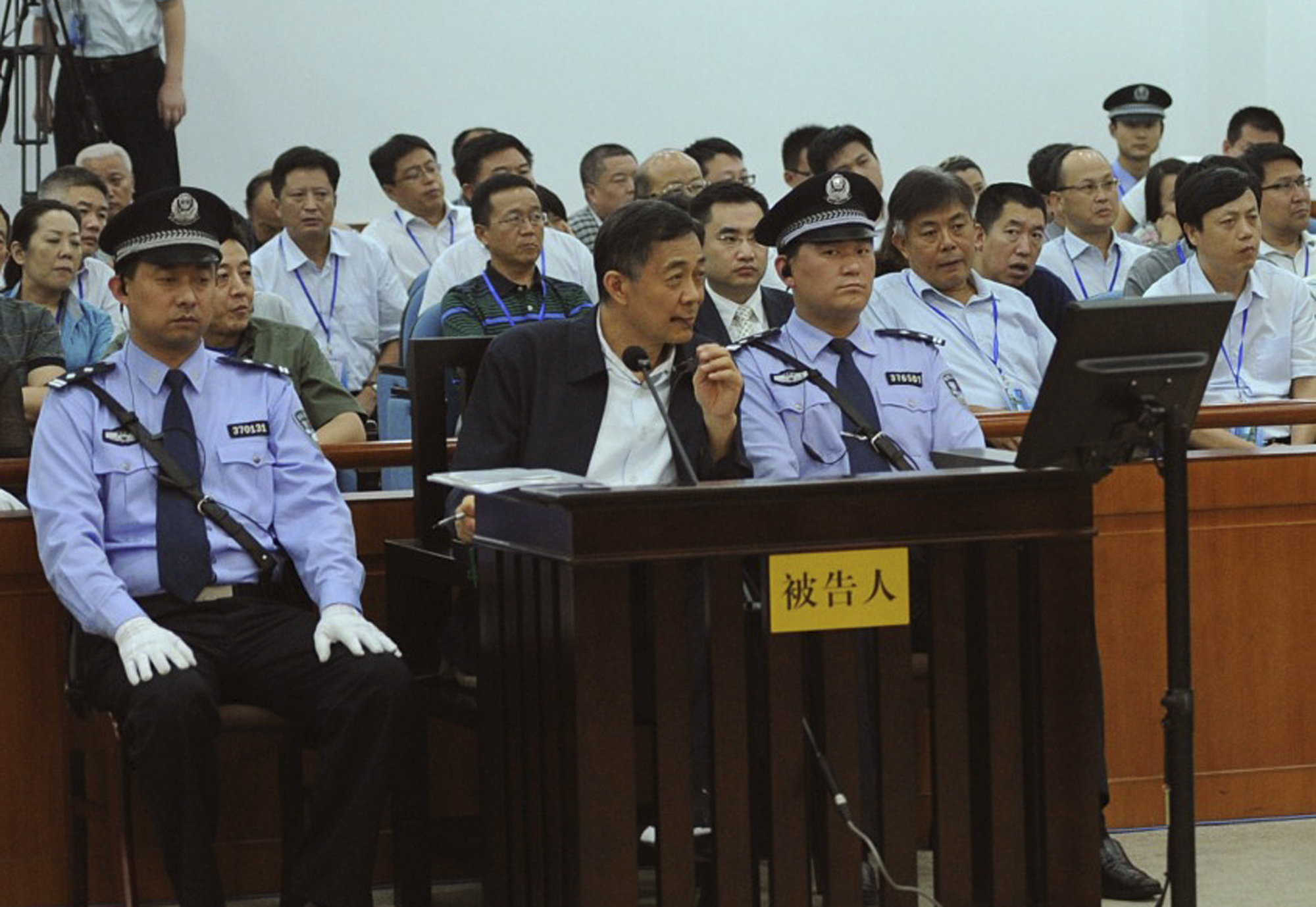 JINAN, China The defense strategy of fallen Chinese politician Bo Xilai, who is battling accusations of corruptionand shielding a murderer, boils down to this: One of the prosecution's key witnesses is a liar, and the other is crazy.

Four days of testimony ended Sunday, with Bo assailing his former right-hand man, much as he had done previously to his wife, the other key witness to testify against him. The trial, which has offered a glimpse into the shady inner workings of China's elite, resumed Monday to hear closing arguments.

The court heard allegations over the weekend that Bo abused his power as the Communist Party secretary of the southern megacity of Chongqing to block an investigation into his wife's murder of a British businessman, as well as to hide his aide's embarrassing flight to a U.S. consulate.

Bo told the Jinan Intermediate People's Court that Chongqing police chief Wang Lijun, "constantly lied in his testimony." He said his former close aide, Wang, was "a person of very vile quality, who lied in court and muddied the waters."

Bo acknowledged that he made mistakes in the handling of the incidents that triggered the nation's biggest political scandal in decades and brought shame on the Communist Party, but he denied criminal misconduct.

The Communist Party is using the trial to cement Bo's downfall and wrap up a scandal that hangs over the party's recently installed new leadership as it tries to cement its authority and fully focus on tackling serious economic and social challenges. Bo's downfall also has been widely perceived as the result of his defeat in party infighting ahead of China's once-a-decade leadership transition last fall.

In a rare show of openness, the court has been publicizing presumably pre-vetted details of the trial in a bid to lend credibility to what is widely seen as a political show trial. Based on what is provided in the transcripts, Bo, in return, has refrained from using the trial as a stage on which to denounce the administration and the opponents who purged him -- which would likely be the leadership's worst nightmare.

"So far, the worst has been avoided," said Ding Xueliang, a Chinese politics expert at Hong Kong University of Science and Technology. "He's been trying to play the game within the limitations set up by the Chinese leadership. He does not talk about politically sensitive things, even though everybody inside and outside China knows that he's in trouble for politics."

Still, the ousted leader mounted an unexpectedly spirited defense against charges of abuse of power and of netting $4.3 million through corruption, recanting earlier confessions and rarely expressing contrition as he sought to lay the blame for most of the misdeeds on his wife and others. He deftly cross-examined witnesses, and was selectively unable to recall key details when the questioning turned to him.

It appeared to be Bo's last-ditch effort to repair the damage the scandal wrought on the clean, populist image he had so carefully cultivated for years -- and might have caught by surprise prosecutors who were armed with the confessions and other evidence.

"Today's society faces acute contradictions, and people tend to involuntarily sympathize with those who are being attacked by the authorities, so he's been able to portray himself as a victim, as a defeated hero," said Zhang Lifan, a Chinese historian and political analyst.

Courtroom revelations have painted a colorful picture of how Bo's alleged misconduct enriched his family. He's accused of providing political favors to a businessman, Xu Ming, in return for having him at his family's beck and call. According to Bo's wife, Xu gave the family expensive gifts that included a villa in France and international airfare to three continents. Bo is also accused of funneling $800,000 in government funds from a secret project.

Bo threw his wife, Gu Kailai, under the bus for much of the corruption charges and even some aspects of the abuse of power allegation. Calling her "crazy" after she testified against him, he said he could not be held responsible for crimes she committed without his knowledge. But Chinese officialdom is familiar with the strategy of spreading out an officeholder's illicit assets and wealth among relatives and trusted friends, so Bo's defense is unlikely to convince the public, said Ding, the Chinese politics expert.

The trial laid out how Gu hatched a complicated plan with the help of two foreigners to hide the family's ownership of the French villa, worth millions, and set up a chain of associates through which government funds could be embezzled discreetly.

"It was the first time such a high-ranking family has put down the operation step by step," Ding said. "This case has taught us so much about the dynamics and mechanisms in most Chinese corruption cases."

Testimony also revealed how one of the foreigners, Neil Heywood, demanded more money by threatening the safety of Bo's son and to expose the family. Gu later killed him with poison and received a suspended death sentence for the murder.

The court also heard evidence over the weekend about the events surrounding the attempted U.S. defection bid by Wang, the police chief, in February 2012, an incident that blew open the scandal. Wang said he fled to the consulate fearing for his safety after he told Bo that the politician's wife had murdered Heywood.

Bo told the court that he slapped Wang in the face and smashed a cup because he initially thought Wang was framing his wife for the crime. "I thought he was being duplicitous. I have zero tolerance for duplicity," Bo said. "I slapped him in the face."

Wang, who testified Saturday, said the violent confrontation with Bo, his subsequent removal as police chief and the disappearance of his subordinates who were investigating the murder spurred him to flee to American officials.

"It was dangerous at the time," Wang told the court. "I was subject to violence, and my staff working closely with me and those working on the case disappeared."

Wang said he believed Bo had ordered an investigation into the police officers involved in the murder case to try to shield his wife -- which Bo denied.

Prosecutors also accused Bo of firing Wang from his post as police chief without first seeking the necessary authorization of other departments, and fabricating news that Wang was away on "vacation-style therapy" when he fled to the consulate.