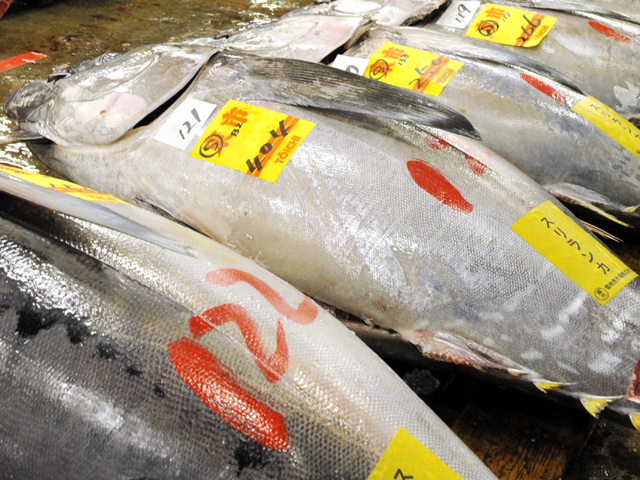 PORTLAND, Maine - The bluefin tuna has escaped being placed on the endangered species list, but the majestic fish prized by sushi lovers will be listed as a "species of concern" by the federal agency that oversees America's fisheries.

After extensive scientific review, the National Oceanic and Atmospheric Administration announced Friday it has determined that bluefin tuna does not warrant protection under the Endangered Species Act. The agency conducted the review after the Center for Biological Diversity submitted a petition seeking an endangered status for the fish, claiming the species faces possible extinction because of overfishing and habitat degradation, including effects of the BP oil spill on bluefin spawning grounds in the Gulf of Mexico.

Even though bluefin will not be listed as endangered or threatened, NOAA officials said they still have concerns about the fish, which can swim at speeds faster than 50 mph and grow to more than half a ton in size.

NOAA scientists will revisit the status of the species in early 2013 when a new stock assessment and information on the impacts of the BP oil spill are available.

"We remain concerned about the status of bluefin tuna, both fishing quota compliance and the potential effects of the Deepwater Horizon BP oil spill on the western stock of Atlantic bluefin tuna," said Larry Robinson, NOAA's assistant secretary for conservation and compliance.

Bluefin tuna populations worldwide have come under scrutiny for decades, with conservationists saying stocks are overfished and in jeopardy. Because the fish swim such long distances, they are managed by the International Commission for the Conservation of Atlantic Tunas, a multi-governmental organization based in Spain. The species is managed as two stocks — the western Atlantic and the eastern Atlantic, which includes the Mediterranean Sea.

Tuna populations have fallen 80 percent in the past 40 years, said Katherine Kilduff, staff attorney for the Center for Biological Diversity's oceans program.

Although NOAA fell short of listing tuna as endangered, the agency's concerns about the fish might serve as a wake-up call for ICCAT and others to institute new safeguards for the fish, she said. The fish is under threat from a lack of enforcement of existing laws, especially in the Mediterranean, from the BP oil spill and from long-line fishermen inadvertently catching and killing them, she said.

"I'm glad they're taking this seriously and will look at this again," Kilduff said. "In my personal opinion, given the status quo, I think they will go extinct."

Bluefin fishermen are relieved NOAA didn't give the fish an endangered status, said Rich Ruais, executive director of the American Bluefin Tuna Association. There are some 5,000 commercial and 15,000 recreational bluefin fishermen from Maine to Texas, he said.

If the fish had been listed as endangered, it would have been illegal to fish for them in U.S. waters or for U.S. fishermen to go after them in international waters, more than 200 miles offshore.

Ruais said U.S. fishermen have been leaders in conservation efforts to ensure the future viability of bluefin, the largest of all tuna species.

Fishermen who go after the eastern Atlantic stock have been notorious for ignoring bluefin quotas, although compliance has improved as of late, Ruais said.

"We view it as ludicrous the suggestion that fishermen could fish a highly migratory species like bluefin to extinction and have always thought (the Endangered Species Act) was an inappropriate tool," he said.

Listing the bluefin as threatened or endangered would have jeopardized the livelihood of tuna fishermen, said Sen. Olympia Snowe of Maine.

The U.S. accounts for about 5 percent of the global bluefin harvest, with more than half the catch being exported, she said. Most of the catch goes to Japan, where a single large fish can sell for tens of thousands of dollars.