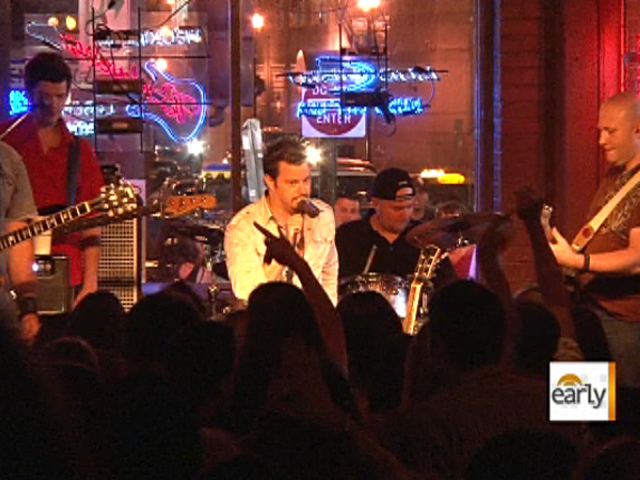 From garages to basements to a hole-in-the wall neighborhood bar, every musician started somewhere -- played his or her songs for people in the hopes that maybe the right person could be listening and a career could be born. "Early Show" Contributor Ayla Brown has the story of one place where that is more likely to happen than just about any other.

It's called The Bluebird Cafe, and what makes this place so special is the people who sit in the audience, and the rich history of some pretty big singer/songwriters who have been discovered on its stage.

They don't call it music city for nothing. Nashville, Tennessee is the epicenter of country -- one of the most popular forms of American music there is.

For all the honky tonks and music bars that line the streets of downtown Nashville, there is one place that stands alone.

"If you are a songwriter or a performing songwriter, you absolutely must come to The Bluebird. If you haven't played the Bluebird, you really haven't established yourself in town," said music publisher Jennifer Johnson.

The Bluebird Cafe -- an unassuming little venue in a strip mall on the outskirts of town -- is the place to play.

Not because the stage is so great, Brown said, adding, "It's not, it's kind of small and cramped. And it's not the acoustics. No, the allure is what The Bluebird stands for."

"It is the songwriters' mecca," Johnson pointed out. There is no other place in town that is more special and more historic for songwriters than The Bluebird Cafe.

Here it isn't about how you look, or how you dress, or even how you play or sing. It's all about the song.

She said of the bar, "We have one room with 100 people in it and they are piled in here. They are sitting on the credenza and stools in the corner and everybody is listening."

And often what they are hearing is great music. Taylor Swift was discovered at The Bluebird. And so was Garth Brooks -- one of the most popular country music artists of all time.

"Actually he was not going to play that night, but someone was sick and so he was filling in for someone who was sick," Johnson explained. "And a representative from Capitol Records just happened to be in The Bluebird Cafe that night, saw him play, pulled him back to the side and asked him, to come to the record label the next day and he was offered a deal. Historic."

"I mean Garth is our poster child for so many reasons. There isn't a day that someone says something about The Bluebird to Garth that he wouldn't just be just hugely supportive of what we do and acknowledge what The Bluebird did for him," Wollam Nichols said.

Turns out, that's no exaggeration!

"The Bluebird is the beginning and the mecca, the end," Garth Brook told CBS News. "You might think this is it, but trust me, the way The Bluebird is run, the songwriters are king. If the whole entertainment world understood that, we'd all be so much better off, because they get it."

Monday night is open mic night at The Bluebird, and hopefuls often travel miles for the chance to be heard.

A group of Toledo, Ohio, natives traveled eight hours for a shot at being the next new star.

"It's a litany of people. You can see 12-year-old girls who want to be Taylor Swift," Wolman Nichols said.

Another group of girls came all the way from Pennsylvania, which is Taylor Swift territory.

When asked if she was trying to be the next Taylor, one girl said, "Of course! Isn't everybody?"

"And you can see grandmothers come in here to try out songs," Wollam Nichols said.

And while not all the dreams are the same, everybody wants to be heard.

"I'd like to see a publisher out in the audience like my stuff and sign me to a publishing deal. I'm too old, fat, and ugly for the singing end of it," said one songwriter.

Any kind of music goes at The Bluebird, as long as it's original, family friendly, and most important, Brown said, heartfelt.

"When you are raising three kids by yourself there's not a lot you can do as far as touring, so I don't expect to be a superstar," admits one man in line with his son. "But if I could have someone out there -- that would be great -- to see my songs."

For most, the dream will go no further than this one moment on this little stage. But that is enough to connect them to history.

"There's permanent vibrations in these walls where everybody who has performed here has come through, and it is a home for songwriters," added Wollam Nichols. "It is an awesome responsibility in the true sense of the word awesome to uphold this place for the people who have been here and the people who are going to come here."

Six-Word Memoirs Can Say It All
View CBS News In
CBS News App Open
Chrome Safari Continue
Be the first to know
Get browser notifications for breaking news, live events, and exclusive reporting.