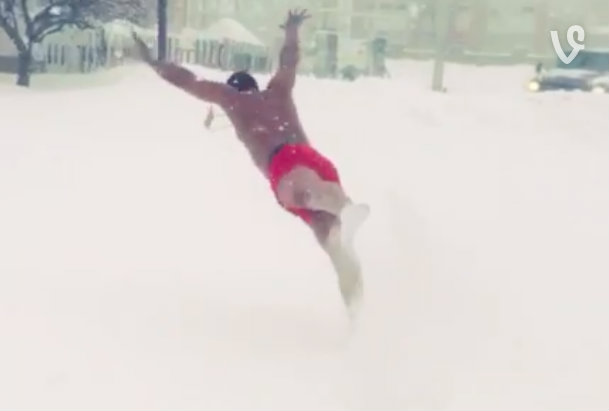 BOSTON - A "massive" winter storm brought the city more than just a few feet of snow this week.

While officials warned millions of people in the Northeast to stay inside during the blizzard, some Boston residents took the warnings as a challenge - the #BostonBlizzardChallenge, to be exact.

The #BostonBlizzardChallenge slammed the Boston area on Tuesday as thousands of young adults took part in a dangerous stunt that requires participants to remove articles of clothing and jump into piles of snow.

The new trend is reminiscent of the #IceBucketChallenge, a social media campaign created by the ALS Association to raise awareness and money for research into Lou Gehrig's disease. The challenge involved a person getting drenched with ice water, posting a video as proof on social media and then nominating others to do the same.

The difference between the #BostonBlizzardChallenge and the #IceBucketChallange: The blizzard challenge doesn't appear to be raising awareness for a good cause.

Somehow that doesn't seem to be stopping people from stripping down in nearly freezing temperatures.

Within the past 24 hours, nearly 2,200 people have tweeted about the challenge, according to social media analytics site Topsy. Additionally, around 500 posts on Instagram include the hashtag.

"The #BostonBlizzardChallenge lets see who's brave enough," one Twitter user posted, along with a video.

"#BostonBlizzardChallenge got the whole Boston rocking," another user posted.

Some social media users have even reportedly seen Boston residents combining the #BostonBlizzardChallenge and the #IceBucketChallenge.

"I just saw a clip of a woman doing the #BostonBlizzardChallenge and #IceBucketChallenge at the same time. My goodness!" another user posted.

Despite the threat of hypothermia or frostbite, it doesn't look like these Bostonians are ready to stop.