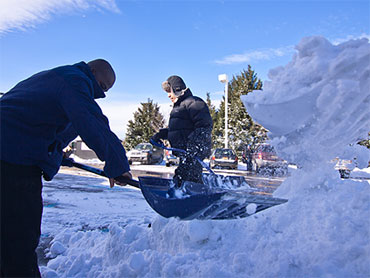 NEW YORK - Stranded passengers turned terminals into open-air hotels as they waited for planes to take off and land on plowed runways after a massive blizzard sucker-punched the northeastern U.S. during one of the busiest travel days of the year.

Air travel in the nation's busiest, most crowded airspace nearly shut down completely after the storm socked the Northeast with more than 2 feet of snow on a holiday weekend when Americans all seemed to be traveling or just unprepared.

A tractor-trailer skidded off a road and smashed into a house in Maine. A woman went into labor on a New Jersey highway, causing a traffic jam that stranded 30 vehicles. Rails on the normally reliable New York subway shorted out. Winds topping 65 mph ripped power lines, leaving tens of thousands of people in the dark across New England.

The words "on time" lit up at least half the departure boards early Tuesday at LaGuardia, where passengers stretched out sleeping under blankets along the windowsill of a food court.

Passengers crammed into airports in other cities on Tuesday hoping for a chance to reach their destinations. At Chicago Midway International Airport, lines stretched around inside and out in the cold as weary travelers got there early in the hope of getting on a flight. More than 225 flights were canceled Monday in Chicago.

The storm, which dumped 20 inches of snow in Central Park Sunday, was New York City's sixth-worst since record-keeping began in 1869, said Adrienne Leptich, a meteorologist with the National Weather Service. A Feb. 11-12, 2006, storm dropped 26.9 inches of snow on Central Park, breaking the previous record, set in 1947, by half an inch.

The storm was sprawling and fickle, dropping 29 inches on Staten Island; 32 inches on Rahway, New Jersey; about 12 inches on Philadelphia; and 19 inches in South Boston, according to the Weather Service.

The massive snowfall brought New York City to a halt, with even plow trucks and rescue vehicles experiencing trouble navigating the snow-choked streets. The conditions created a backlog of 1,400 emergency 911 calls and up to a 12-hour wait for emergency responses, reports CBS News correspondent Whit Johnson.

The city's outer-borough residents complained of a sluggish response by snow plow crews who still hadn't finished clearing the streets. State Sen. Carl Kruger, a Democrat who represents Brooklyn, called the city's response a "colossal failure." Fire officials said the unplowed streets and abandoned cars made it harder to respond to emergencies, including a five-alarm, wind-whipped blaze at a Queens apartment building Monday night.

A testy Mayor Michael Bloomberg defended the city's cleanup effort, saying the crews were being slowed down by abandoned cars on the streets.

"There's no reason for everybody to panic," he said. "Our city is doing exactly what you'd want it to do."

After spending Sunday night tossing and turning on airport floors, thousands of bleary-eyed travelers spent Monday standing in lines, begging for flights, fighting for taxis and hunting for hotel rooms.

Stuck at New York's LaGuardia airport since Sunday morning, Janelle Wilson told CBS News that getting a straight answer from the airlines has been nearly impossible.

"If they would just say nothing's going to happen until Tuesday, so we could make arrangements. But there's always this little bit of hope, like "Well…" said Wilson, who is waiting with her husband for a way back to their Ohio home.

When passengers do get answers, they don't like what they are hearing - that home may be as far away as Thursday or Friday due to the backlog of travelers from a holiday week that's normally overbooked to begin with, reports CBS News correspondent Michelle Miller.

The storm wreaked havoc on almost every form of conveyance: from the buses at the nation's busiest terminal near Times Square to the region's usually punctual commuter trains.

Across the region, the storm's aftermath was punctuated by surreal moments, like the sight of Adrian Traylor, 29, roaming the Newark airport terminal in a Scottish kilt and bare legs as subfreezing winds howled outside.

Traylor, who lives in Scotland, was on his way to visit relatives in Las Vegas and said he wore the kilt to impress his family.

"I didn't think I'd be wearing it this long," he said.

Christopher Mullen returned from sunny Cancun, Mexico, to find his car buried in the snow in long-term parking at New York's Kennedy airport. After trying to dig it out and getting soaked in the process, he finally gave up and took the subway - which promptly broke down.

Mullen and his girlfriend spent eight hours in a freezing subway car, shivering under a thin blanket.

The storm spared no one, not even men who travel on ice for a living. A bus carrying the Toronto Maple Leafs hockey team got stuck in the blizzard for four hours while trying to return to their hotel after a game against the New Jersey Devils. And, members of the U.S. luge team lost two days of training after they were stranded on their way to Koenigssee, Germany.

In Philadelphia, pedestrians dodged chunks of ice blown off skyscrapers.

Some travelers tried to make the best of it. At the Newark airport, Frank Mann, his son 9-year-old son Stephen and his girlfriend Jackie Douglas said their night on the terminal floor was sort of like taking a camping trip.

They made beds out of luggage trays turned upside down, ate hot dogs from the snack bar and even did some bird-watching: pigeons seeking refuge from the elements were taking baths in puddles of water dripping from the ceiling.

When things got boring, Stephen pulled out his Kindle to finish a book he had started before getting stranded.

The book was about another youngster stranded far from home by bad weather: L. Frank Baum's The Wonderful Wizard of Oz.