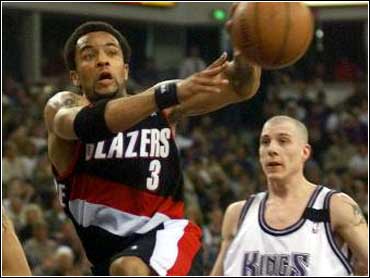 Rasheed Wallace made all the tough shots at the end for the Portland Trail Blazers. The Sacramento Kings couldn't quite match them.

Wallace had a key basket near the end of regulation and scored seven of his 24 points in overtime as the Trail Blazers won their eighth straight by defeating the Kings 108-103 Sunday.

"I thought our guys executed offensively down the stretch and they hung tough," said Portland coach Mike Dunleavy, whose team squandered a 14-point lead late in the third quarter. "It's a tough environment to play in when a team comes back big and they come strong with the firepower that they have."

Scottie Pippen added 21 points, Steve Smith had 15 and Bonzi Wells 12 for the Trail Blazers, who improved their league-best road record to 22-8. Arvydas Sabonis had 14 rebounds to go with his 11 points.

Sacramento lost for just the fifth time in 21 games at home despite 33 points and 19 rebounds from Chris Webber. Predrag Stojakovic added a season-high 25 points and Corliss Williamson contributed 12 points in a game matching two of the top teams in the Western Conference.

Still, Wallace's play, especially his strong finish, was pivotal for the Trail Blazers (42-11), who ensured their 1th straight winning season with the victory.

Wallace's seven points in the extra period matched the total scored by the Kings.

After Wallace converted a three-point play, Webber's driving layup and basket on a goaltending call tied it at 101 with 2:00 left in the extra period.

Tyrone Corbin had a layup for Sacramento and then stripped the ball from Wallace. But Webber couldn't muscle in a driving layup over Wallace. Both Webber and Kings coach Rick Adelman lobbied for a foul call but didn't get it in what proved to be the turning point.

He was matter-of-fact about the Trail Blazers' ability to fend off the Kings' rally.

"They caught the momentum, shot a couple of 3s," Wallace said. "We missed some shots and they ran down and got some layups. It's simple basketball, nothing too special about that."

Said Wells: "We let them back in but that's what we do. We give teams a little taste and we take it out of their mouths."

With 16.6 seconds remaining, Pippen made one of two free throws and the Kings got off three 3-point tries in the final moments, two by Stojakovic and the other Darrick Martin but they were all off target as Sacramento fell to 0-6 against Portland over the last two seasons.

"When I let them go, they felt good and I thought they were going in but ...," said Stojakovic, who finished a point shy of his career high. "We didn't shoot the ball well today and they played great. I think right now, Portland is the best team in the league."

The Trail Blazers appeared on the brink of breaking the game open after Wallace and Pippen hit consecutive 3-pointers for 78-64 lead with 2:12 remaining in the third quarter.

But the Kings got back in it in a hurry, closing the third with a 10-3 burst to narrow Portland's lead to 81-74 heading into the game's last 12 minutes. Jon Barry sparked the surge, getting a long bounce pass to Scot Pollard for a breakaway dunk and finishing another fastbreak with a 3-pointer.

Wells hit a 16-foot jumper to start the fourth quarter before Sacramento ran off nine straight points, tying it at 83 on Webber's 21-foot jumper with 7:03 remaining.

In the last 1:17 of regulation the lead changed three times before ending in a tie.

Wallace's 15-foot jumper with 30 seconds left put Portland up 96-95 but Webber made one of two free throws to even the score. Both teams had a chance to win in the final seconds of regulation. Damon Stoudamire and Webber each missed long jumpers.