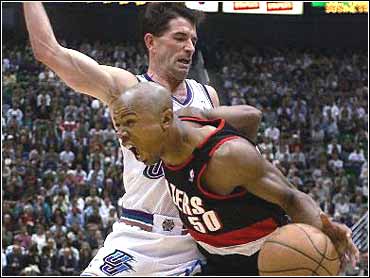 The Portland Trail Blazers, solid at every position, are solidly in control of the Utah Jazz.

Arvydas Sabonis scored 22 points and Steve Smith had 21 as the Trail Blazers beat the Jazz 103-84 Thursday night for a 3-0 lead in the Western Conference semifinals.

Bonzi Wells scored 10 of his 19 points in the fourth quarter to help the Blazers hold off a second-half Utah surge, leaving the Jazz one game from being swept in a best-of-seven series for the first time in franchise history.

"If we allowed this team to win this game, I think they'd feel like they could win the series," Portland's Scottie Pippen said. "This game has put some doubts into their minds."

Game 4 is at the Delta Center on Sunday, with Utah trying to become the first team in NBA history to rally from a 3-0 deficit. The odds don't favor it, and the Jazz sounded like they knew it.

"Sunday is just a pride game for me," said Karl Malone, who scored 28 points but was held to two in the fourth quarter. "I don't think anyone wants to end the year getting swept."

The capacity crowd of 19,911, full for much of the second half, began filing out with three minutes to play. They'd seen enough, after the Blazers began the fourth quarter with an 11-2 run and pulled away for another blowout victory.

"If I was in the crowd, I'd have left too," said Jeff Hornacek, who scored 24 points. "If we'd have lost these games by one or two or four, I'd think there would be more hope."

The Jazz, who played for the NBA title in 1997 and 1998, trailed by 21 points in the second quarter but trimmed the margin to 55-49 at halftime and then tied it three times in the third quarter.

But Utah never led in the second half and the Jazz were outscored 28-14 in the final period. Portland took advantage of the outside shooting of 7-foot-3 Sabonis, who went to the perimeter because of foul trouble but still scored.

"If it is wide open, why not shoot?" Sabonis said.

Rasheed Wallace scored 17 points for the Blazers, who held Utah to 40 percent shooting.

Hornacek, whose 14 years in the NBA will end if the Jazz lose Sunday, played like his career was at stake, shooting 9-of-17. Bryon Russell added 18 points for the Jazz.

Utah had beaten Portland in 10 of the previous 13 playoff games in Salt Lake City, but the Blazers weren't intimidated. Now, they've won 10 of their last 12 against the Jazz.

"All I know is it's 3-0 in the series," Blazers backup point guard Greg Anthony said. "That team is too good for us to allow any complacency to creep in on our part. We've got to play even better on Sunday."

That's scary, because the Blazers, who beat Utah in six games last year in the Western Conference semifinals, have made it look easy this year.

The Blazers posted up Smith on Hornacek and Sabonis on Olden Polynice, following the same script they had used in dominating Game 2, and it helped them build a double-digit lead in the second quarter.

"There's no weak guys out there," Hornacek said. "There's an offensive threat at every position and that makes it tough."

Once again, the Jazz offered little resistance early, and Portland's lead swelled to 53-32 4:50 before halftime on a basket by Schrempf. It seemed the Blazers would put the Jazz away.

Boos echoed across the Delta Center, and the message seemed to invigorate the Jazz. Utah closed the half with a 17-2 run, with Malone and Hornacek each scoring six points, to trail by six at halftime.

"We were happy to have such a big lead there," Smith said. "They could have gotten the momentum, which they did, but it took too much out of them. It kind of wore them down."

The crowd was with the Jazz throughout the second half, but Utah couldn't break through. Leading 75-70 at the end of the third quarter, Portland opened the fourth with the 11-2 run that virtuall put the game away.