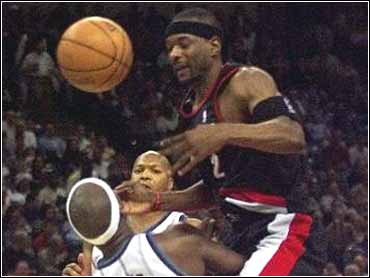 Portland didn't wait for the Charlotte Hornets to give up their 12-game home winning streak. Instead, the Trail Blazers went in and took it away with a dominating fourth quarter.

Portland used its usual stellar defense and dominated the boards Thursday night to pick up its 10th straight victory, 83-70 over the Hornets.

The Trail Blazers earned a season sweep over the Hornets for the second consecutive year.

"We came in knowing they had a long winning streak here, and no one would have lost any sleep if we had lost to them," said Portland guard Greg Anthony.

"But we went out and grabbed the game in the fourth quarter, and by doing so, we showed we have a lot of pride and we want to the best."

With 27 victories, Portland is the best team in the NBA at least in the win column.

"We feel pretty good right now, like we can make a run at it this year," said Steve Smith, who scored nine of his 16 points in the deciding fourth quarter.

"We are playing defense, sharing the ball, enjoying the game and really playing with consistency."

The Hornets, who rallied from a 17-point deficit in the first quarter and led by nine late in the third, were booed as they left the floor. They were held to a season-low 12 fourth-quarter points and gave allowed Portland to grab a season-high 55 rebounds compared to Charlotte's 40.

"They did a great job on the boards and we're not a team that usually gets outrebounded," said P.J. Brown, who was held to a season-low two rebounds.

"We need to be nasty and dirty under the basket and we didn't do that tonight."

The Trail Blazers tied it at the end of the third period with a 9-0 run. Damon Stoudamire, who finished with 16, scored seven straight in the run.

Portland continued its run in the fourth quarter, using a 12-4 run to pull away.

Trailing 66-65 with 6:54 to play, Greg Anthony started Portland's spurt with a jumper. Charlotte missed its shots on its next two trips down the floor and the Trail Blazers got consecutive 3-pointers from Anthony and Smith to make it 74-66.

After Elden Campbell cut it to 74-68 on a layup, Arvydas Sabonis hit two free throws and Smith scored four straight points to push it to 79-68 with 1:58 to play.

Charlotte only scored once more, on a long jumper from Derrick Coleman with 1:47 left.

"In the third quarter, we went up by nine and they fought back. That was the ballgame," Charlotte coach Paul Silas said.

Campbell led Charlotte with 23 points and 10 rebounds. Coleman had an awful night, scoring four points on 2-of-8 shooting and drawing loud boos after every miss.

The game was a stark contrast from the first meeting, an 89-67 Portland rout on Jan. 1 that was Charlotte's worst loss of the season. But Campbell and his backup, rookie Jamaal Magloire, both missed that game because of injuries.

The two were back on the court this time, but neither team was at full strength.

Jamal Mashburn, Charlotte's leading scorer, missed his fourth consecutive game with a bruised bone in his knee and Portland forward Scottie Pippen missed his second straight with tendinitis in his right elbow.