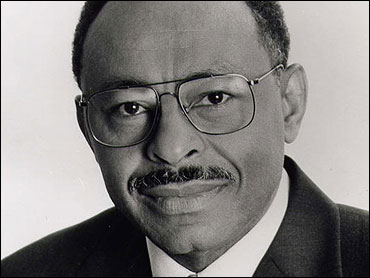 An attorney for Burris says paperwork was filed today with the Illinois Supreme Court.

It's the start of legal wrangling over the Senate seat. Illinois Gov. Rod Blagojevich appointed Burris on Tuesday despite the governor's arrest on federal corruption charges.

White rejected Blagojevich's proclamation and says he won't sign off on appointments by Blagojevich because of the accusations against him. The governor says he's innocent.

White spokesman Dave Druker said the state agency had not reviewed the court filing but believes it is acting within its authority.

The issue of race may become a complicating factor in Illinois Gov. Rod Blagojevich's controversial appointment of Burris to the same seat the governor is accused of trying to sell.

The move has been widely criticized by Senate Democrats and the Illinois secretary of state said he would not certify the appointment of the 71-year-old Burris, the first African-American elected to major statewide office.

But proponents of the appointment say the Burris' potential spot as the Senate's only African-American trumps concerns about the scandal-plagued Blagojevich.

"The recent history of our nation shows us that sometimes there can be individuals and there can be situations where you have officials standing in the way of schoolchildren," Illinois Rep. Bobby Rush told CBS' The Early Show Wednesday. "And I'm sure the U.S. Senate doesn't want to see themselves placed in the same position."

Rush, a Democrat, said opponents of Blagojevich's appointment "need to take a chill pill," and insisted that Illinois residents "should not be denied representation," in a Senate that will likely vote on Obama's immense economic stimulus package in the coming months.

Fifty members of the U.S. Senate Democratic Caucus have signed onto a letter chastising Blagojevich for taking this defiant step, reports CBS News correspondent Cynthia Bowers. And Mr. Obama came out in opposition the move.

"Roland Burris is a good man and a fine public servant, but the Senate Democrats made it clear weeks ago that they cannot accept an appointment made by a governor who is accused of selling this very Senate seat. I agree with their decision," the president-elect said in a statement.

But Rush dared Senate Democrats Tuesday to block Roland Burris' appointment, urging them not to "hang and lynch" the former state attorney general for the alleged corruption by his patron, Blagojevich.

After Rush's Tuesday comments, the racial aspect of the appointment became a central factor.

For his part, Burris said he was "humbled to have the opportunity" and promised citizens he would "uphold the integrity of the office and ask for their continued confidence in me."

Democratic state Rep. Monique Davis of Chicago, a member of an impeachment committee considering Blagojevich's fate, said Burris' appointment will have no bearing on its decision.

Burris told CBS News he wont create a scene but he fully expects to be sworn in next week as Mr. Obama's successor.

Senate Democrats said that won't happen, and both sides are ready, if necessary, to fight it to the Supreme Court, reports CBS News correspondent Wyatt Andrews.

Meanwhile, U.S. Attorney Patrick Fitzgerald filed a motion seeking a 90-day extension to return an indictment against Blagojevich because "multiple witnesses" had come forward in recent weeks and and investigators have to review "thousands of intercepted phone calls."

"I don't think it's particularly significant that the U.S. Attorney's office has asked for an extension," writes CBS News legal analyst Andrew Cohen. "It's clear that new information about the case is coming out and remember, too, that there was a rush to bring the charges against Blagojevich to help ensure he didn't complete any of the bribery schemes he is alleged to have started."

Blagojevich was arrested Dec. 9 after federal prosecutors allegedly recorded conversations in which he discussed appointing someone Obama favored in exchange for a position in the new president's Cabinet or naming someone favored by a union if he got a high-level union job.

The governor has faced a flood of calls for his resignation, and the Illinois House has begun impeachment proceedings. He maintains his innocence, and has vowed to stay in office.

4693216Illinois law gives the governor sole power to fill a Senate vacancy. Lawmakers considered stripping Blagojevich of that power after his arrest, but could not agree on legislation.

In a statement Tuesday, Senate Democrats maintained that Blagojevich should not make the appointment because doing so would be unfair to Burris and to the people of Illinois.

"It is truly regrettable that despite requests from all 50 Democratic senators and public officials throughout Illinois, Gov. Blagojevich would take the imprudent step of appointing someone to the United States Senate who would serve under a shadow and be plagued by questions of impropriety," the statement said.

"Under these circumstances, anyone appointed by Gov. Blagojevich cannot be an effective representative of the people of Illinois and, as we have said, will not be seated by the Democratic caucus."

More recently, however, Burris has had a string of political disappointments. He lost campaigns for the Democratic gubernatorial nomination in 1994, 1998 and 2002 - the last time losing to Blagojevich. In 1995, he was badly beaten when challenging Chicago Mayor Richard Daley as an independent.