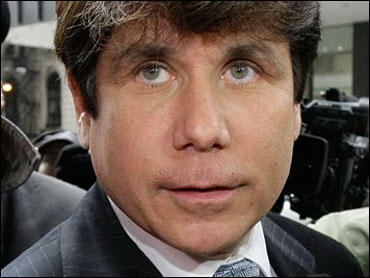 An aide to Rod Blagojevich testified Wednesday that he believed Barack Obama knew about the former Illinois governor's plot to cut a deal to get a presidential Cabinet post in exchange for appointing Obama favorite Valerie Jarrett to the U.S. Senate, according to the Chicago Sun-Times.

John Harris, Blagojevich's former chief of staff, testified that just three days after the presidential election, the ex-governor told Harris he felt confident Obama knew he wanted to swap perks, according to the newspaper.

But Blagojevich became bitter when told that the newly elected president would give him thanks - but nothing else - in return for naming Jarrett to the Senate, according to an FBI tape played Thursday at the former governor's corruption trial.

With Harris on the stand, prosecutors played an FBI tape on which Harris is heard telling Blagojevich that the Obama camp has sent word that it would be "thankful and appreciative" if Jarrett were appointed to the Senate seat.

Jarrett, a Chicago businesswoman and former aide to Mayor Richard M. Daley, was a longtime Obama family friend and the president-elect wanted her to have the Senate seat he was leaving.

Blagojevich had allegedly sent word through a labor union official that he would appoint Jarrett if Obama agreed to appoint him as secretary of health and human services.

Blagojevich apparently took the words "thankful and appreciative" as a sign that the Obama camp didn't want such a deal. Jarrett later withdrew her name and is now a White House adviser, and Blagojevich named former Illinois Attorney General Roland Burris to the Senate.

"They're not willing to give me anything but appreciation," Blagojevich is heard saying glumly on tape. Jurors also heard his voice as he punctuated his remark, "(Expletive) them."

Blagojevich, 53, has pleaded not guilty to charges that he schemed to get a large payoff, a high-paying job after he left office or a big campaign contribution in exchange for the Senate seat. He has also pleaded not guilty to conspiring to launch a racketeering scheme using the power of the governor's office.

If convicted, he could face up to $6 million in fines and a sentence of 415 years in prison, although he is certain to get much less time under federal guidelines.

His brother, Robert Blagojevich, 54, has pleaded not guilty to taking part in the alleged scheme to sell or trade the Senate seat and conspiring to put illegal pressure on a potential campaign donor, a racetrack owner who wanted Blagojevich to sign beneficial legislation.

Harris testified that the message that Obama would be "thankful and appreciative" came from Rahm Emanuel, now the White House chief of staff, through lobbyist John Wyma.

Stung, Blagojevich told Harris he could leak word to the media that U.S. Rep. Jesse Jackson Jr.'s "star is rising" as a possibility for the seat, Harris testified.

Harris said such a leak would be designed to unsettle Obama and his confidants, who Blagojevich believed looked unfavorably on Jackson. Blagojevich made clear in conversations the same day he had no intention of actually appointing Jackson, calling him "a bad guy ... really bad."

But on Nov. 12, 2008, as news broke that Jarrett had received a White House appointment, Blagojevich appears stumped about whom to appoint.

"If not Valerie Jarrett, then who?" Blagojevich asks Harris, seemingly puzzled.

Zagel had earlier declined a request for even a brief delay in the trial to give defense attorneys a chance to read the Supreme Court decision and see how it might fit in with their strategy.

The law in question - the honest services fraud law - underlies about half the charges against Blagojevich. Among other things, it says public officials may not deny taxpayers their honest services.

Zagel has said the trial is about the former governor's conduct

not the technical question of which law he is charged with violating. The judge said he had given the high court's ruling a preliminary reading and "it may not offer a lot of hope for you."

Prosecutors have indicated that if the Supreme Court struck down or sharply curbed the law they would be prepared to proceed under the remaining charges, dropping the honest services counts.

A spokesman for the U.S. attorney's office declined to comment on the decision.