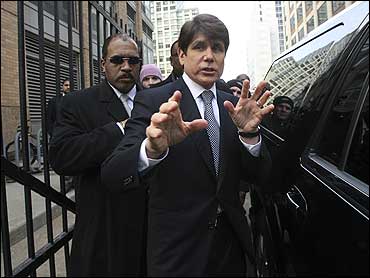 By the time the Rod Blagojevich's impeachment trial opened in Springfield the Illinois governor was already well into his efforts to upstage it with a series of high profile TV appearances, reports CBS News correspondent Cynthia Bowers.

Blagojevich is refusing to take part in the trial. He says its rules are biased against him.

He's insists his innocent and he refuses to resign. When asked about those profanity laced FBI wiretaps in which Blagojevich allegedly is heard trying to sell, among other things, President Obama's senate seat, he says the full story hasn't come out yet, Bowers reports.

"The fix is in," Blagojevich said. "And soon, I will join the unfortunate legion of others who are losing their jobs in our country."

"He's clearly trying to create a reasonable doubt in people's minds," says public relations expert Gene Grabowski. "It usually doesn't work with a politician who's got this much baggage. He's been dragging into the interviews, but it may be the only play he has right now."

That may explain the oddly timed revelation that he thought about giving Obama's senate seat to Oprah Winfrey.

Winfrey later said if she had seen Blagojevich make the claim this morning while working out, she "probably would have fallen off the treadmill." She said she believed she could be senator but is not interested in the job.

On "The View," one of the hosts told Blagojevich she'd heard he did an impression of Richard Nixon; pressed for an "I am not a crook," the governor refused.

Appearing with Geraldo Rivera on Fox News, Blagojevich called the trial a "kangaroo court." He also said that the entire episode "has been an unimaginable, shocking turn of events in my life and my family's life."

As the Illinois Senate assembled for the first impeachment trial of a U.S. governor in more than 20 years, David Ellis, the House-appointed prosecutor, told the chamber that he will show that Blagojevich "repeatedly and utterly abused the powers and privileges of his office."

In one of his first orders of business, Ellis won approval from the Senate to summon as a witness an FBI agent who oversaw the profanity-laden wiretaps that led to Blagojevich's arrest on corruption charges last month.

With Blagojevich refusing to present a defense, Illinois senators could vote within days on whether to oust the 52-year-old Democrat on a variety of charges, including allegations he tried to sell the U.S. Senate seat left vacant by President Barack Obama.

State senators maintained the trial will be fair, despite Blagojevich's attacks on the process.

"We all took an oath to do justice according to the law. I know that everyone is taking the matter seriously and that no one will stand in the way of justice,'' said Senate Minority Leader Christine Radogno, a Republican.

Blagojevich was arrested Dec. 9, accused of scheming to benefit from his power to name Obama's replacement in the Senate. He was impeached by the House earlier this month on additional charges of circumventing hiring laws and defying decisions by the General Assembly. A two-thirds majority of the Senate could convict him at trial and throw him out of office.

Read more about the Blagojevich trial on Hotsheet

While refusing to attend the trial, Blagojevich made clear he would only defend himself through a media blitz.

"That's all we can do," Blagojevich attorney Sam Adams told CBS News. "That's all we have left now, is to let the people of the United States, of Illinois, know what is happening in Springfield."