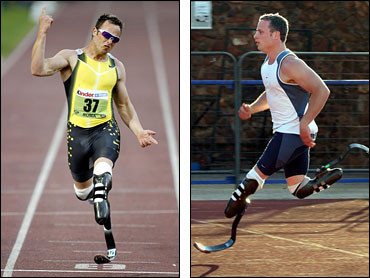 Double-amputee sprinter Oscar Pistorius was not chosen Friday to be on South Africa's Olympic team for the Beijing Games.

Besides failing to meet the qualifying standard to run in the 400 meters, Pistorius was left off the 1,600-meter relay team. Athletics South Africa president Leonard Chuene said four other South Africans had faster times, and two others were chosen as alternates.

Pistorius has battled with authorities for months, ultimately winning an appeal at the Court of Arbitration for Sport in May that allowed him to compete against able-bodied athletes and more recently facing concerns that he could pose a danger to other athletes.

But Pistorius fell short of the 400 qualifying time of 45.55 seconds. On Wednesday, he recorded a personal best of 46.25. He said in May that his legal battles had prevented him from focusing on training, and that it might be more realistic to aim at qualifying for the 2012 London Olympics.

Efforts to reach Pistorius were not immediately successful. His manager, Peet Van Zyl, said he hadn't heard any official word about the decision. However, he said considering Pistorius' recent times, he didn't expect the runner to be asked to join the team.

"From the beginning, we knew that he had to qualify," Van Zyl said. "We didn't expect him to be granted any special opportunity or anything. The rules are the rules."

The IAAF said Thursday that it fully supported Pistorius' bid to run at the Olympics, despite comments made earlier this week by general secretary Pierre Weiss expressing concerns that Pistorius would pose a danger because of the blade-like prosthetics he uses to run.

The comments "have no effect on the official eligibility of Oscar Pistorius, nor should they be misconstrued as a personal attack on Oscar," the International Association of Athletics Federations said in a statement.

On Wednesday, the New York legal firm of Dewey and Leboeuf, which represents Pistorius, threatened legal action against the IAAF, demanding that it withdraw a statement that the body did not have the resources to check the legality of Pistorius' blades each time he ran.