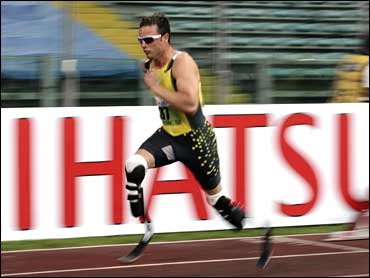 The IAAF ruled Monday that double-amputee sprinter Oscar Pistorius is ineligible to compete in the Beijing Olympics because his prosthetic racing blades give him a clear competitive advantage.

The International Association of Athletics Federations had twice postponed the ruling, but the executive Council said the South African runner's curved, prosthetic "Cheetah" blades were considered a technical aid in violation of the rules.

"As a result, Oscar Pistorius is ineligible to compete in competitions organized under IAAF Rules," the IAAF said in a statement.

Pistorius, known as the "blade runner," announced last week that he would appeal any adverse decision, including taking the case to the Court of Arbitration for Sport in Lausanne, Switzerland.

The IAAF endorsed studies by German professor Gert-Peter Brueggemann, who conducted tests on the prosthetic limbs and said they give Pistorius a clear competitive advantage over able-bodied runners.

"An athlete using this prosthetic blade has a demonstrable mechanical advantage (more than 30 percent) when compared to someone not using the blade," the IAAF said.

Pistorius worked with Brueggemann in Cologne for two days of testing in November to learn to what extent the j-shaped carbon-fiber extensions to his amputated legs differed from the legs of fully abled runners.

Brueggemann found that Pistorius was able to run at the same speed as able bodied runners on about a quarter less energy. He found that once the runners hit a certain stride, athletes with artificial limbs needed less additional energy than other athletes.

The professor found that the returned energy "from the prosthetic blade is close to three times higher than with the human ankle joint in maximum sprinting." 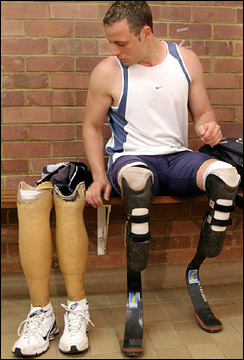 (AP Photo/Denis Farrell)
Based on these findings, the Council ruled against Pistorius, seen at left.

The IAAF adopted a rule last summer prohibiting the use of any "technical aids" deemed to give an athlete an advantage over another.

Ossur, the Icelandic company which is a leader in the production of prosthetics, braces and supports and also made Pistorius' blades, has said the blades do not provide an edge over able-bodied athletes.

Pistorius has set world records in the 100, 200 and 400 in Paralympic events. To make the Olympics in Beijing, Pistorius would still need to qualify for the South African team and make the qualifying times.

Pistorius was born without fibulas - the long, thin outer bone between the knee and ankle - and was 11 months old when his legs were amputated below the knee.

He began running competitively four years ago to treat a rugby injury, and nine months later won the 200 meters at the 2004 Paralympic Games in Athens.

Pistorius competed in the 400 at two international-level able-bodied meets in 2007. He finished second in a B race in 46.90 seconds at the Golden League meet in Rome on July 13 and, two days later, was disqualified for running out of his lane in Sheffield, England.