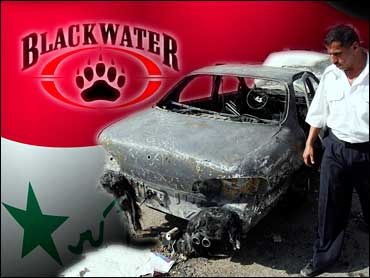 Blackwater Worldwide is abandoning its tarnished brand name as it tries to shake a reputation battered by oft-criticized work in Iraq, renaming its family of two dozen businesses under the name Xe.

The decision comes as part of an ongoing rebranding effort that grew more urgent following a September 2007 shooting in Iraq that left at least a dozen civilians dead. Blackwater president Gary Jackson said in a memo to employees the new name reflects the change in company focus away from the business of providing private security.

"The volume of changes over the past half-year have taken the company to an exciting place and we are now ready for two of the final, and most obvious changes," Jackson said in the note.

In his memo, Jackson indicated the company was not interested in actively pursuing new private security contracts. Jackson and other Blackwater executives told The Associated Press last year it was shifting its focus away from such work to focus on training and providing logistics.

"This company will continue to provide personnel protective services for high-threat environments when needed by the U.S. government, but its primary mission will be operating our training facilities around the world, including the flagship campus in North Carolina," Jackson said.

The company has operated under the Blackwater name since 1997, when chief executive Erik Prince and some of his former Navy SEAL colleagues launched it in northeastern North Carolina, naming their new endeavor for the area swamp streams that run black with murky water. But the name change underscores how badly the Moyock-based company's brand was damaged by its work in Iraq.

In 2004, four of its contractors were killed in an insurgent ambush in Fallujuah, with their bodies burned, mutilated and strung from a bridge. The incident triggered a U.S. siege of the restive city.

The September 2007 shooting in Baghdad's Nisoor Square added to the damage. The incident infuriated politicians both in Baghdad in Washington, triggering congressional hearings and increasing calls that the company be banned from operating in Iraq.

Blackwater spokeswoman Anne Tyrrell said the company made the name change was largely because of changes in its focus, but acknowledged the need for the company to shake its past in Iraq.

"It's not a direct result of a loss of contract, but certainly that is an aspect of our work that we feel we were defined by," Tyrrell said.