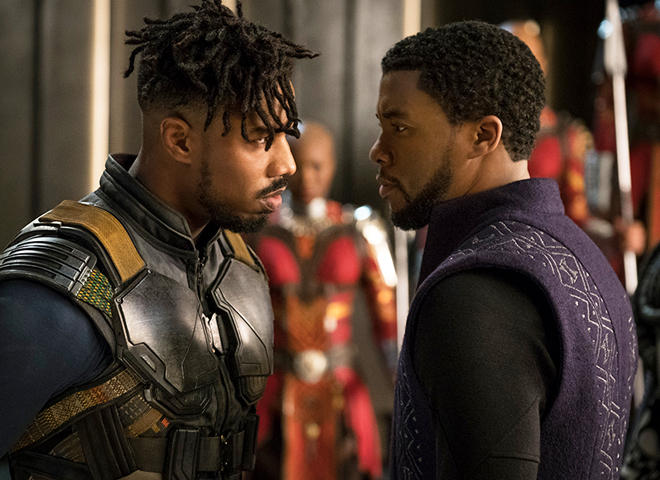 NEW YORK -- "Black Panther" is proving that representation sells. With its lavish, headline-grabbing premiere, standout critical reviews, sold-out shows and long lines, the film is a hit, and it has the box office numbers to prove it.

The phenomenon of "Black Panther" had the look and feel of a classic, bona fide blockbuster in route to its record-setting $201.8 million debut over the weekend, or an estimated $235 million Friday through Monday. Much has been made about the film industry's struggles to tap into pop culture the way it once more regularly did -- that TV and streaming options and a dearth of fresh ideas have diminished the power of the big screen.

But when Hollywood does manufacture a must-see theatrical event, it has increasingly been propelled by the power of inclusivity. Just as Jordan Peele's Oscar-nominated "Get Out" ($253 million worldwide on a $4.5 million production budget) and Patty Jenkins "Wonder Woman" ($821.1 million) did before it, "Black Panther" captured the zeitgeist by the potent combination of top-notch filmmaking (the film stands at 97 percent fresh on Rotten Tomatoes), studio backing and an audience hungry to see itself represented on the big screen in a way it seldom has before.

At the box office, inclusion is paying -- and often, it's paying off big time.

"Diversity does in fact, sell," said Darnell Hunt, a professor and director of social science at UCLA whose research has detailed the connection between diversity and bottom lines. "In hindsight, it's kind of a no-brainer. The American public is about 40 percent people of color now, and we know that people of color over-index in terms of media consumption. The patterns we've been seeing are only becoming more pronounced as time goes on."

"Black Panther" debuted with $361 million in worldwide ticket sales, setting up the $200 million film for a theatrical run that should easily eclipse $1 billion. History is assured. Just months after Jenkins helmed the biggest box-office hit directed by a woman, Ryan Coogler will set a new mark for films directed by an African American. The debut, the best ever for February, is the fifth highest of all time, not accounting for inflation.

At a time where hits are hard to come by for Hollywood, diversity in storytelling is proving to be not only a just cause, but a box-office imperative.

"If you want to succeed on the global stage, certainly in the tent-pole business, you have to have diversity in storytelling, in the characters that you put in front of the camera, in the artisans you put behind the camera -- to be able to get that better, richer storytelling and to drive huge results," said Dave Hollis, distribution chief for Disney. "The results speak for themselves."

Hollis pointed to the many factors that made "Black Panther" a hit: Coogler's direction, the stewardship of Kevin Feige's Marvel, the reliability of the brand. But he also noted a developing pattern for Disney -- that inclusive films are both richer for their diversity and, often, richer for the bottom line.

"It feels like the right thing to do. It makes for better, richer storytelling, and we're a business. It's something that's just delivered big, huge box office," said Hollis. "When we have leaned into and had inclusion and representation as part of the mix, it's just really worked. When you think about 'Star Wars' and 'Rogue One,' the female protagonist leading those stories. Also 'Moana' or 'Coco.' 'Coco' has been an absolute juggernaut."

"Coco," which is expected to win the Oscar for best animated feature next month, has grossed more than $730 million worldwide. It's the biggest budget release starring an all-Latino cast.

By promoting diversity in its films, Disney has faced some backlash from social-media critics who deride films like "The Last Jedi" and Sony's 2015′s female-led "Ghostbusters" as politically correct overreach. Some fans have even gone to the extraordinary length of trying to drive down audience scores for those films.

But consider the fate of movies that haven't tried as hard to be culturally authentic. Paramount's "Ghost in the Shell," which starred Scarlett Johansson in a role originally written as a cyborg in a Japanese woman's body, last year bombed at the box office after a backlash over Johansson's casting.

Meanwhile, the diverse cast of Universal's "The Fast and the Furious" films helped make it one of the most bankable franchises in movies. Other standout hits have included "Girls Trip" -- the biggest comedy of 2017 -- and Sony's unexpectedly lucrative "Jumanji: Welcome to the Jungle." The film, starring Dwayne Johnson and Kevin Hart, reigned over the January box office as the no. 1 film on four weekends.

"Jumanji" has grossed more than $904 million worldwide, including more than a half a billion dollars overseas. The old argument that films starring African-American actors don't travel well has never had a worse two months. "Black Panther" opened with $160 million abroad, even without several markets (China, Japan, Russia) yet open.

"'Black Panther' can be an important first step toward really dispelling the myth that has held Hollywood back for generations in terms of telling the stories that we certainly want to see in this country but I think that the rest of the world wants to see, too," said Hunt.

Studies have also shown that diverse casts attract wider audiences. Last year, talent agency CAA found that of the top 10 grossing films in 2016, 47 percent of the opening-weekend audience was made up of people of color, up 2 percent from the year before. The effect was even more pronounced in the biggest hits. Seven of the 10 highest-grossing films from 2016 had opening weekend audiences more than 50 percent white.

The audience for "Black Panther" was 65 percent non-white, including 37 percent black, according to comScore.

"If you look at some of the bigger blockbusters from the last year, they were representative of what the audience are looking for, how they're feeling," said Paul Dergarabedian, senior media analyst for comScore. "These films reflect society and then society reflects back on the films. That's when you get to these much bigger than expected debuts. It becomes more than a movie. It becomes a cultural event."

Communal movie-going may be under siege from other entertainment options. But films like "Black Panther" are making movie theaters more communal than ever.