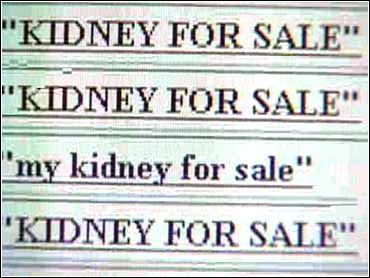 Instead, authorities say, he brokered the sale of black-market kidneys, buying organs from vulnerable people from Israel for $10,000 and selling them to desperate patients in the United States for as much as $160,000.

The alleged decade-long scheme, exposed last week by an FBI sting, rocked the nation's transplant industry. If true, it would be the first documented case of organ trafficking in the U.S., transplant experts said Friday.

"There's certainly cross-national activity, but it hasn't touched the United States or we haven't known about it until now," said University of Pennsylvania medical ethicist Arthur Caplan, who is co-directing a U.N. task force on international organ trafficking.

Rosenbaum was arrested Thursday, 10 days after meeting in his basement with a government informant and an FBI agent posing as the informant's secretary. The agent claimed to be searching for a kidney for a sick uncle on dialysis who was on a transplant list at a Philadelphia hospital.

"I am what you call a matchmaker," Rosenbaum said in a secretly recorded conversation. "I bring a guy what I believe, he's suitable for your uncle." Asked how many organs he had brokered, he said: "Quite a lot," the most recent two weeks earlier.

As part of the scheme, the organ donors were brought from Israel to this country, where they underwent surgery to remove the kidneys, authorities said. Prosecutors did not identify which hospitals in the U.S. received the donors and their kidneys.

"The allegations about an organ trafficking ring in the United States are appalling," said John Davis, CEO of the National Kidney Foundation.

Israel Medical Association spokeswoman Orna Cohen said the organization had no reports there of Israelis selling organs. "If it's true, then it's shocking," she said.

Micky Rosenfeld, a spokesman for Israel's national police force, said Israeli police were not involved in the investigation, and he would not comment further.

Under 1984 federal law, it is illegal for anyone to knowingly buy or sell organs for transplant. The practice is illegal just about everywhere else in the world, too.

But demand for kidneys far outstrips the supply, with 4,540 people dying in the U.S. last year while waiting for a kidney, according to the United Network for Organ Sharing. As a result, there is a thriving black market for kidneys around the world.

Nancy Scheper-Hughes, an anthropology professor at the University of California at Berkeley and the author of an upcoming book on human organ trafficking, said that she has been tracking the Brooklyn-connected ring for 10 years and that her contacts in Israel have called Rosenbaum "the top man" in the United States.

Scheper-Hughes said she was told Rosenbaum carried a gun, and when a potential organ seller would try to back out, Rosenbaum would use his finger to simulate firing a gun at the person's head.

Scheper-Hughes said she was also told that some of the kidney transplants using sellers procured by Rosenbaum were performed at Mount Sinai Hospital in New York.

The hospital said it is aware Rosenbaum has been charged but that its transplant screening process is rigorous and that it assesses each donor's motivation.

"All donors are clearly advised that it is against the law to receive money or gifts for being an organ donor," spokeswoman Brenda Perez wrote in an email. "... The pre-transplant evaluation may not detect premeditated and skilful attempts to subvert and defraud the evaluation process."

Rosenbaum was arrested in a sweeping federal case that began as an investigation into money laundering and trafficking in kidneys and fake designer bags. It mushroomed into a political corruption probe, culminating in the arrests this week of 44 people, including three New Jersey mayors, various other officials, and five rabbis. The politicians and rabbis were not accused of involvement in the organ trafficking.

Rosenbaum, 58, is a member of the Orthodox Jewish community in the Borough Park section of Brooklyn, where he told neighbours he was in the construction business.

For someone who was not a surgeon, Rosenbaum seemed in his recorded conversations to have a thorough knowledge of the ins and outs of kidney donations, including how to fool hospitals into believing the donor was acting solely out of compassion for a friend or loved one.

He was recorded saying that money had to be spread around liberally, to Israeli doctors, visa preparers and those who cared for the organ donors in this country. "One of the reasons it's so expensive is because you have to shmear (pay others) all the time," he was quoted as saying.

At a 2008 meeting with the undercover agent, Rosenbaum claimed he had an associate who worked for an insurance company in Brooklyn who could take the recipient's blood samples, store them on dry ice and send them to Israel, where they would be tested to see if they matched the prospective donor, authorities said.

Four checks totalling $10,000, a down payment on the fictitious uncle's new kidney, were deposited in the bank account of a charity in Brooklyn, prosecutors said.

Dr. Francis Delmonico, a Harvard professor, transplant surgeon and board member of the National Kidney Foundation's Board of Directors, said similar trafficking is going on elsewhere around the world. He said an estimated 10 per cent of kidney transplants — 5,000 to 6,000 each year — are done illegally. Hot spots are Pakistan, the Philippines and China, where it is believed organs are obtained from executed prisoners, he said.

Caplan, the University of Pennsylvania ethicist, said he expects the U.N. task force to make recommendations in October that would hold hospitals worldwide accountable for establishing the origins of each organ they transplant and whether it was freely donated without compensation.

"There is a black market, almost exclusively in kidneys," Caplan said. "All international medical groups and governments ought to condemn any marketing in body parts. It's simply too exploitative of the poor and vulnerable. The quality of the organs is questionable. People lie to get the money. The middle men are irresponsible and often criminals. They don't care about the people who sell."

Scheper-Hughes said her research has uncovered hundreds of cases of illegal organ transactions brokered by and for Israelis in Israel, South Africa, Turkey and other countries, with sellers recruited from poor communities in Moldova, Brazil and elsewhere.

In 2003 and 2004, 17 people were arrested in Brazil and South Africa on suspicion of participating in an international human organ trafficking organization. Investigators said Brazilians who passed a medical checkup were flown to South Africa, where their kidneys were extracted.

A few transplant surgeons support changing the law to allow a system of regulated compensation to increase the pool of donor kidneys.

Arthur Matas, a transplant surgeon who directs the kidney transplant service at the University of Minnesota Medical School, said donors could be compensated with some combination of lifetime access to medical care, life insurance, a tax credit, help with college and a small direct payment.

"It would minimize the extraordinary black market and exploitation of impoverished people internationally," Matas said.

Martin Weinfeld, who lives around the corner from Rosenbaum in Brooklyn, said the allegations bring shame on the community.

"It puts a bad name on good people," he said. "Religion is supposed to be about God, helping others, not about the cash."