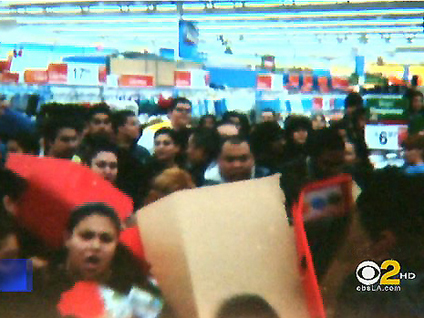 LOS ANGELES - A woman suspected of showering Black Friday shoppers with pepper spray surrendered to authorities but was released pending further investigation after she refused to discuss the incident, police said Saturday.

The woman, whose name was not released, is suspected of firing pepper spray into a crowd in order to clear a path to a crate of Xbox video game players that were being unwrapped late Thanksgiving night at a Walmart in the upscale Porter Ranch section of the San Fernando Valley.

The suspect got away in the confusion, and it was not known if she bought one of the Xboxes. Ten people suffered minor injuries from the spray and 10 others sustained cuts and bruises in the ensuing chaos.

"Last night at 8:30 the suspect involved in the pepper spray incident at the Porter Ranch Walmart turned herself in," police Sgt. Jose Valle said Saturday. She immediately invoked her right against self-incrimination, however, and refused to discuss the incident further.

Valle said investigators still have nearly a dozen witnesses to interview, including several spraying victims. He added it would likely be at least two days before an arrest in the case could be made.

If the woman who surrendered is indeed the person who sprayed the crowd she could face battery charges.

The attack took place about 10:30 p.m., shortly after the Walmart opened its doors for the traditional Black Friday sales on the day after the Thanksgiving holiday that kick off the Christmas shopping season. A crowd of people had gathered to wait for store employees to unwrap the crate of discounted Xboxes.

The incident was among those nationwide in which violence marred the traditional kickoff to the holiday shopping season on the Friday after Thursday's Thanksgiving holiday.

In the most serious case, a robber shot a shopper who refused to give up his purchases outside a San Leandro, California, Walmart store, leaving the victim hospitalized in critical but stable condition.

Police in San Leandro, about 15 miles east of San Francisco, said the victim and his family were walking to their car around 1:45 a.m. Friday when they were confronted by a group of men who demanded their shopping items. When the family refused, a fight broke out, and one of the robbers pulled a gun and shot the man, said Sgt. Mike Sobek.

Meanwhile, police in suburban Phoenix came under fire when a video was posted online showing a 54-year-old grandfather on the floor of a Walmart store with a bloody face, after police said he was subdued Thursday night trying to shoplift during a chaotic rush for discounted video games.

In a police report that redacted the names of officers and witnesses, Newman's wife and other witnesses said he was just trying to help his grandson after the boy was trampled by shoppers, and only put a video game in his waistband to free his hands to help the boy.

Ariz. grandpa roughed up by police in Walmart

Larry Hall, assistant chief of Buckeye police, said Newman was resisting arrest and it appeared the officer acted within reason.

Hall said the officer decided to do a leg sweep and take him to the ground but the man unfortunately hit his head.

"The store was incredibly crowded, and I was concerned about other customers' safety," the officer wrote in his police report.

Hall said Newman, who had a bloody nose and received four stitches on his forehead, was booked on suspicion of shoplifting and resisting arrest.

In Sacramento, California, a man was stabbed outside a mall Friday in an apparent gang-related incident as shoppers were hitting the stores.

The victim was taken to a hospital with non-life-threatening injuries, police said.

The stabbing stemmed from a fight between two groups around 3 a.m. in front of a Macy's department store at the Arden Fair Mall.

No arrests have been made. Police were hoping surveillance video will help identify the suspects.