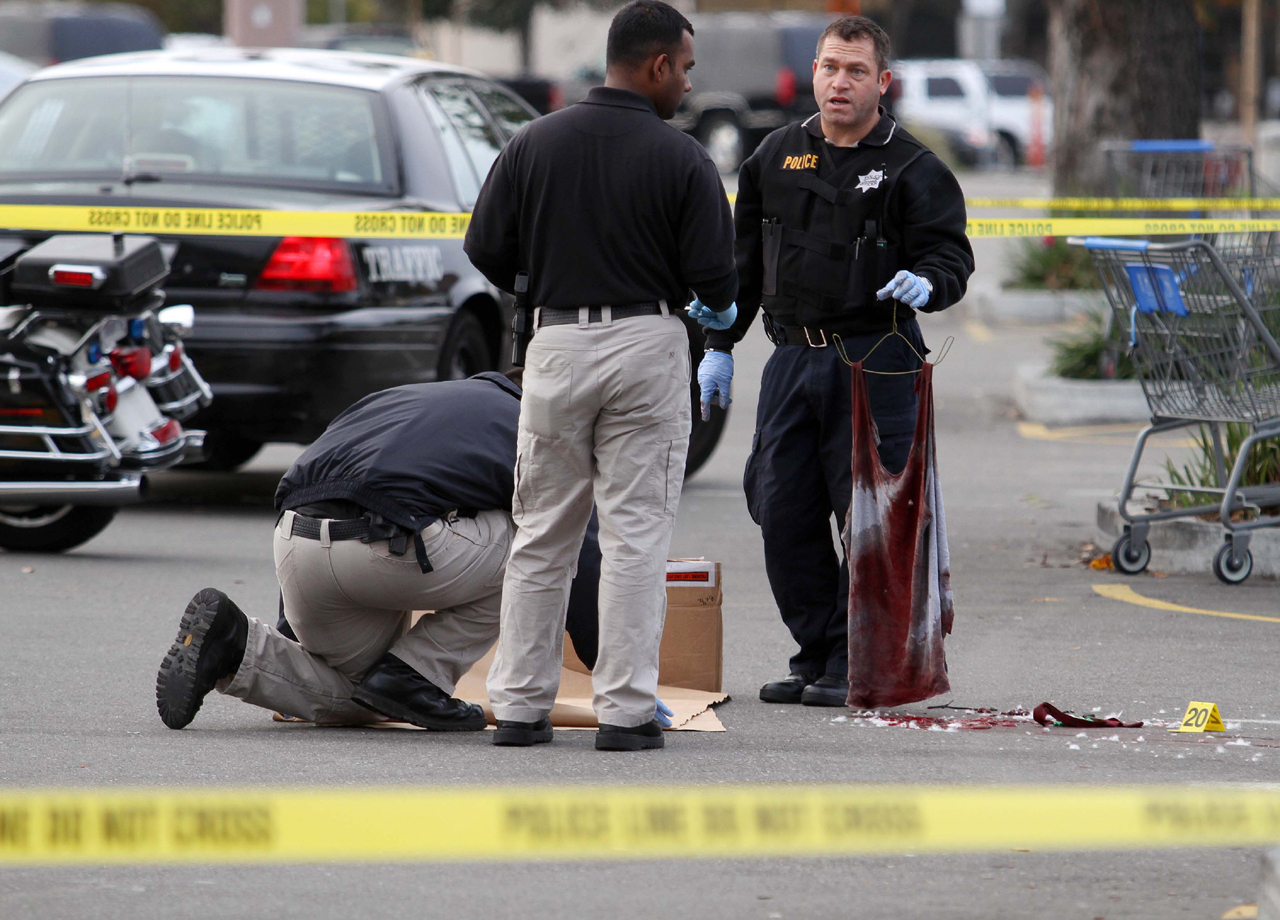 Several violent incidents broke out across the country amid what have been mostly peaceful Black Friday crowds, as millions of shoppers rushed into stores that opened their doors hours earlier than usual on the most anticipated shopping day of the year.

But tensions seemed to reach a boiling point at some stores.

On Thanksgiving night, a Walmart in Los Angeles brought out a crate of discounted Xboxes, and as a crowd waited for the video game players to be unwrapped, a woman fired pepper spray at the other shoppers "in order to get an advantage," police said.

Ten people suffered cuts and bruises in the chaos, and 10 others had minor injuries from the spray, authorities said. The woman got away in the confusion, and it was not immediately clear whether she got an Xbox.

Other reports of violence during Black Friday shopping include a shooting during an attempted robbery in the parking lot of a Walmart store in San Leandro, near Oakland.

One shooting victim is in critical but stable condition after being accosted by would-be thieves. One of two suspects was detained by the victim's family and arrested. Police are searching for a second man.

Witnesses said the Walmart parking lot was crowded with Black Friday shoppers at the time, and the store was briefly closed as police investigated.

And in Sacramento, CBS Station KOVR reports police are investigating a stabbing outside the Macy's store at Arden Fair Mall during the early morning hours Friday.

The victim suffered a non-life threatening stab wound to his midsection and was transported to a local hospital.

Mall security reported the victim and his friends has gotten into a verbal fight with another group of shoppers before the stabbing.

No arrests have been made. Police were hoping surveillance video will help identify the suspects.

There were also reports of gunfire at Cross Creek Mall in Fayetteville, N.C. According to CBS Affiliate WRAL, shots were fired outside the mall near the food court entrance around 2 a.m. One suspect ran inside the mall, and a second followed him, firing more shots. No one was reported injured. Shoppers left the mall and some smaller stores closed in the wake of the shooting. Police say they're looking for two suspects.

Near Muskegon, Mich., a teenage girl was knocked down and stepped on several times after getting caught in the rush to a sale in the electronics department at a Walmart. She suffered minor injuries.

In Kinston, N.C., a disturbance involving Walmart shoppers prompted security to arrest a former police officer and use pepper spray to calm the crowd.

Shopper Angel Bunting told CBS Affiliate WRAL the incident began when a man waiting in line for discounted cell phones fell into a display. But authorities said customers became restless and a fight broke out among them, as employees were setting up the electronics display.

Gordon Jackson, 58, a former Kinston police officer, was arrested. Police said he didn't follow instructions. Jackson said there wasn't a fight, and that people were jockeying for position in line. He said a police officer over-reacted by using pepper spray.

"He was raining it over the whole crowd, so it will rain down on their heads," Jackson told WNCT-TV. "Some of it got my granddaughter in her face and eyes, and she had to go the emergency room because she's asthmatic."

Kinston director of public safety Bill Johnson told Reuters that the off-duty officers hired as store security guards for the event discharged pepper spray to restore order when customers tried to grab merchandise from the pallets before the sale time. "No one was pepper sprayed in the face," Johnson said.

In Myrtle Beach, S.C., a 55-year-old woman was shot in the foot after two men demanded her purse shortly after 1 a.m. Friday in a parking lot across from a Wal-Mart store.

Another woman told police she heard the victim scream, and fired fired several shots in the air herself; the suspects ran away with the victim's purse.

The woman was taken to a local hospital. There was no word on her condition.

In Milford Conn., a police officer used a taser on a Wal-Mart shopper who allegedly punched another customer. Police said 26-year-old Brian Shellnutt hit another customer as they waited in line to buy video games late Thursday night.

Authorities said an 11-year-old boy was knocked to the ground by the crowd, and Shellnutt confronted the boy's father as he helped him to his feet. Police say Shellnutt punched another man who came to the aid of the father and son.

He allegedly ignored an officer's warning to stop fighting before the officer used the stun gun on him. Shellnutt was charged with third-degree assault, second-degree breach of peace and risk of injury to a minor.

CBS Affiliate WTVH reports several fights broke out in the electronics department of a Walmart store in Rome, N.Y. just after midnight.

Several shoppers were pushed to the ground, according to Oneida County Sheriff's Deputies. Two customers were transported to Rome Memorial Hospital with minor injuries.

One man was arrested for disorderly conduct.

In Kissimmee, Fla., two men got into a verbal altercation at a Walmart store early Friday morning, CBS Affiliate WKMG reports. When officers arrived to separate the men, the aggressor resisted and swung at one of the officers, police said.

The man was taken to the ground and arrested on charges of resisting arrest, WKMG said.

Later in the morning, another Phoenix television station reported witnesses saying police slammed a grandfather in a Walmart in Buckeye, Ariz., to the ground after he allegedly put a game in his waistband so that he could lift his grandson out of the crowd.

Wal-Mart, the nation's biggest retailer, has taken steps in recent years to control its Black Friday crowds following the 2008 death of one of its workers in a stampede of shoppers. This year, it staggered its door-buster deals instead of offering them all at once.

Wal-Mart spokesman Greg Rossiter said Black Friday was safe at most of its nearly 4,000 U.S., but there were "a few unfortunate incidents."

The incidents were attributed to two converging Black Friday trends: Crowds are getting bigger as stores open earlier and stay open later. At the same time, cash-strapped shoppers are competing for deals on a small number of gifts that everybody wants — tablet computers, TVs and game consoles like Xbox, Nintendo 3S and Wii.

That's a shift from years past, when there was a wider range of must-have items.

The incidents come as a record number of shoppers are expected to head out to stores across the country this weekend to take advantage of discounts of up to 70 percent. For three days starting on Black Friday, 152 million people are expected shop, up about 10 percent from last year, according to the National Retail Federation.

Indeed, about 600 shoppers were in line at a Target store in Brooklyn in New York when it opened at midnight. By the time it opened at midnight, nearly 2,000 shoppers wrapped around a Best Buy store in St. Petersburg, Fla. Mall of America, the nation's largest mall in North America, had 15,000 shoppers for its midnight opening. And more than 9,000 people were outside the flagship Macy's store in New York's Herald Square at its midnight opening, up from 7,000 a year ago.

"I came here for the deals," said Sidiki Traore, 59, from Roosevelt Island, N.Y. who bought three shirts for $50 at the Macy's. He also went to Toys R Us for its 9 p.m. opening on Thanksgiving and bought three toys for $106 for his four-year-old son.

In addition to opening earlier than usual this year, some stores offered to match their competitors' prices, rolled out layaway programs or offered more door-buster deals than last year.

Emmanuel Merced and his brother showed up at a Best Buy in New York at 3 p.m. on Wednesday so they could be the first in line when it opened at midnight Thursday to grab a Sharp 42-inch TV for $199.99, a PlayStation 3 with games for $199.99 and wireless headphones for $30.

Merced said he likes camping out for Black Friday and figured he saved 50 percent.

The crowds are good news for retailers, many of which depend on the busy holiday shopping season for up to 40 percent of their annual revenue.

To be sure, not every place was full on Black Friday. With so many major stores opening at midnight, many people stayed up late and shopped early. Then there were those who stuck to their normal routine of going to stores that opened later Friday morning. That left a lull in the hours just before and after daybreak.

At a Target on Chicago's North Side, crowds were light four hours after the store opened at midnight. And door-buster deals, including the typically quick-to-sell-out TVs and game systems, remained piled up in their boxes. Shoppers pushed carts through mostly empty aisles while thumbing through circulars, and employees in Santa hats roamed the store. There was no Christmas music — or any music — playing.

Rebecca Carter, a graduate assistant, began Black Friday shopping at 11 p.m. on Thursday and left Target around 4 a.m. carrying a bag full of pillows. Carter said the crowds were noticeably lighter this year as she and a friend picked up a 32-inch TV for $180 and a laptop for $198, along with toys and pajamas.

For this holiday shopping season, retailers are hoping to rake in $466 billion in sales, so the competition in getting every shopping dollar is tough -- hence why Black Friday is turning into Black Thursday.

"Customers have been telling us for a long time they wanted to come in earlier," said Amy Adonis of Best Buy, told CBS News. She added: "It's a whole multichannel business. People can shop online, shop from home, shop in the store, shop online while they are in the store. It just works out great."

Some Occupy Wall Street protesters, which turned up for the Macy's midnight opening, were expected to plan flash mobs and other events later in the day in places like Chicago, Washington, D.C. and Boise, Idaho to urge people to reconsider shopping at national chains on Black Friday.

In San Francisco, a few dozen people gathered in Union Square to tell shoppers that they should spend their money on education rather than buying clothing and electronics.

About 20 Occupy Sacramento protesters marched from a park to a small downtown mall, chanting that shoppers should support local businesses. They made a stop inside a Macy's department store, where the group's leader asked shoppers through a bullhorn not to make purchases there.

In Harrisburg, Pa., Occupy Harrisburg said a member of its group has been arrested at a city mall on Black Friday over a zombie outfit.

The protester, Jenn Hara, said she was merely asking security for more information about the mall's regulation when she was handcuffed and charged with misdemeanor trespassing.

The U.S. Small Business Administration is also promoting Small Business Saturday, which encourages people to shop at smaller, mom-and-pop stores on the day after Black Friday.