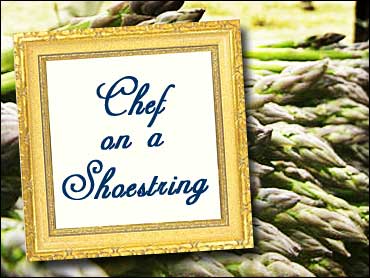 Chef Laurent Tourondel discovered at an early age that the best place for him to learn was not in school, but in the kitchen.

Tourondel has amazed diners in France, Las Vegas and New York with his culinary skills. His new restaurant, BLT Steak in New York CIty, is what he calls "French bistro meets American steakhouse."

We asked Tourondel to take our Chef on a Shoestring challenge and create a three-course meal for four on our $30 budget.

His menu as our Chef on a Shoestring: an appetizer of Leek, Asparagus, and Fingerling Potato Salad; an entrée of Roasted Chicken with Preserved Lemons and Herbed Tomatoes; and for dessert, Chilled Rhubarb and Raspberry Soup.

Tourondel spent hours with his grandmother -- baking cakes, scooping snails out of their butter-soaked shells and coaxing rich flavor out of cocottes of braised rabbit -- mesmerized by the smells and tastes. When he was thirteen, his family figured the only way to get Tourondel to stay in school was to send him to cooking school.

Four years later, Tourondel graduated from the Saint Vincent Ecole de Cuisine in Montlucon, France, with a "d'Aptitude Professionnelle de Cuisinier" to embark on a career that would take him through some of the most esteemed kitchens in the world, but not before cooking in the French military.

While Mom's Dying, Boy Scolded By 911

Afterwards, Tourondel traveled to London's famed Gentleman's Club, Boodles, then followed his dream all the way to New York City for a star-studded tenure as executive chef at celebrity caterers Tentations, Potel & Chabot and as pastry chef for Restaurant Beau Geste. Eager to refine his French technique, Tourondel returned to France to work under Jacques Maximin at Restaurant Ledoyen. After honing his skills, the culinary journey continued, taking him to Moscow's Restaurant Mercury, then ultimately back to the stoves of France for a two-year stint at Michelin three-star Relais & Chateau Troigros. Tourondel had found his calling - in the kitchen.

Tourondel became executive chef of C.T. (Claude Troisgros), his debut restaurant in New York City. There, Tourondel received three stars from Ruth Reichl of The New York Times. After a leave of absence to work under Joel Robuchon, Tourondel returned to the States, and upon C.T.'s closing, traveled west to Las Vegas where he was chosen to commandeer the kitchen of the Palace Court Restaurant at the World Famous Caesar's Palace Hotel & Casino.

In 1998, Tourondel was honored as one of Food & Wine Magazine's "Ten Best New Chefs." Tourondel eventually returned back to New York City, where he received three stars from William Grimes of The New York Times in 1999 for Cello, which closed its doors in late 2002.

BLT Steak (BLT stands for "Bistro Laurent Tourondel") opened in March 2004. He is also finishing up his first cookbook, which will be available in September 2004.

Fingerling Potatoes: Narrow finger-shaped potatoes used for roasting, boiling, baking and salads. Like all potatoes, fingerlings trace their roots to the Andes Mountains of Peru, where they were planted by ancestors of the Incas. They have been used as currency, medicine and clocks. It is believed that the first potato was domesticated more than 6,000 years ago. Fingerlings are known for their rich flavor, moist, waxy or dry texture and striking colors. There is a wide variety of fingerling potatoes; the flavor differs with the variety.

Rhubarb: Tourondel uses rhubarb for his dessert. Though rhubarb is generally eaten as a fruit, it's botanically a vegetable. The thick, celery-like stalks of this member of the buckwheat family can grow up to 2-feet in length. They're the only edible portion of the plant -- the leaves contain oxalic acid and are toxic. There are many varieties of this extremely tart food, most of which fall into two basic types -- hothouse and field grown.

According to "The New Food Lover's Companion," Hothouse rhubarb is distinguished by its pink to pale red stalks and yellow-green leaves, whereas field-grown plants (which are more pronounced in flavor) have cherry red stalks and green leaves. Hothouse rhubarb is available in some regions almost year-round. The field-grown plant can usually be found from late winter to early summer, with a peak from April to June. Choose crisp stalks that are brightly hued. The leaves should be fresh-looking and blemish-free. Highly perishable, fresh rhubarb should be refrigerated, tightly wrapped in a plastic bag, for up to three days. Wash and remove leaves just before using. Because of its intense tartness, rhubarb is usually combined with a considerable amount of sugar. It makes delicious sauces, jams and desserts and in some regions is also known as pieplant because of its popularity for that purpose. In America, a traditional flavor combination is rhubarb and strawberries; in Britain, rhubarb and ginger. Rhubarb contains a fair amount of vitamin A.

In a non-reactive bowl, whisk together mustard and red wine vinegar. While continuing to whisk, slowly add the canola oil in a thin stream, until thick and emulsified. Season to taste with salt and pepper.

In a large pot, bring well-salted water to a boil. Place the leeks in the salted water. Turn the heat to medium-low and cook the leeks for 30 minutes. Remove and set aside to drain in a colander.

In a separate pot, bring salted water to a boil. Place the asparagus in the salted water. Let asparagus cook for about three minutes. Remove and drain in a colander.

In a separate pot, bring salted water to a boil. Then add the fingerling potatoes to the water and cook for 30 minutes on medium-low heat. Remove and drain in a colander. Let the potatoes rest for five minutes before cutting them in half.

In a bowl, combine the leeks, asparagus and potatoes while they are still warm. Toss with the mustard vinaigrette. Divide among four plates and garnish with chopped chives.

In a non-reactive bowl, combine the room temperature butter with the rosemary, onions, breadcrumbs, and preserved lemon.

Place the chicken on a cutting board. Starting at the neck cavity, loosen skin from breast and drumsticks by inserting fingers, gently pushing between skin and meat. Gently lift the skin of the chicken and stuff breadcrumb mixture under skin, distributing evenly. Take care not to rip the skin.

Using a pastry brush or your hands, coat the chicken with olive oil. Season with salt and pepper. Place chicken in a shallow roasting pan. Cover loosely with foil. Roast for about 1 hour and 10 minutes or until the juices run clear. Let the chicken sit for about 5 to 10 minutes before carving.

Preserved Lemon
Chef's Note: Preserved lemons, one of the staples of Moroccan cooking, can be used both in whole form, or chopped into a relish or for use as a salad seasoning. They are a condiment used to flavor everything from stews to fish, frog's legs, poultry and meat dishes. Preserved lemons are available at some grocery and specialty stores, or you can make your own.

Prepare the Lemons: Rinse, brush and pat the lemons dry. Quarter the lemons from the top to within 1/2-inch of the bottom. Sprinkle salt on the exposed flesh, and then reshape the fruit. If you have salt left over, place the salt in the bottom of a 7-cup sterilized mason jar. Place the lemons in the jar. Press the lemons down to release their juices and to make room for the remaining lemons. Sprinkle top layer of lemons with any extra salt. Pour over enough fresh lemon juice to cover lemons well. Set aside.

Prepare the Seasoned Liquid: Pour 3 1/2 cups water into a pot and bring to a boil over high heat. Remove the pot from the heat and add the sugar and olive oil. Stir to combine. Pour the hot mixture over the lemons. Leave some air space before sealing the jar. Leave the jar out for one week on the kitchen counter, shaking it occasionally. Then store in the refrigerator for up to 6 months.

To Use: Rinse the lemons, cut them and use as a side dish, cooking ingredient or condiment. Preserved lemons will keep up to a year, but you must keep them covered with the natural lemon juice. With time, you will see white lacy sediments form in the bottom of your jar; this is normal.

How to Sterilize Jars: Wash the jars in hot suds and rinse them in scalding water. Put the jars in a kettle and cover them with hot water. Bring the water to a boil, covered, and boil the jars for 15 minutes from the time that steam emerges from the kettle. Turn off the heat and let the jars stand in the hot water. Just before they are to be filled invert the jars onto a dishtowel to dry. The jars should be filled while they are still hot. Sterilize the jar lids for 5 minutes.

In a bowl, combine breadcrumbs, garlic and parsley. Season mixture to taste with salt and pepper.

Place the tomato halves on a baking sheet with the cut-side facing up. Season each tomato half with salt and pepper.

Top each tomato half with the breadcrumb mixture, distributing evenly.

Drizzle olive oil over the tomatoes.

Cook on baking sheet in 375 degree F oven for 30 to 35 minutes. Serve at room temperature.

Present the chicken carved on a separate platter from the tomatoes. Let people serve themselves family style. If you wish, you can also serve the preserved lemons as a small condiment.

In a pot combine 2 cups of water, the sugar, the finely chopped lemongrass, the vanilla bean and its seeds.

Bring to a boil, cover, remove from the heat, and let sit for 30 minutes to allow the flavors to infuse.

Strain the syrup and transfer it to a clean pot. Bring it to a boil over high heat.

Add the rhubarb, remove the pot from the heat, cover it, and allow to cool at room temperature. Fold in 1 1/2 cups of raspberries; chill in the refrigerator for at least 4 hours or overnight.

Divide the soup among four bowls. Garnish with the remaining raspberries.