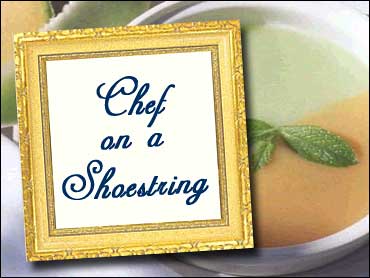 Chef Hamersley wants home cooks to try out his specialties at home, so has written his first cookbook, "Bistro Cooking at Home." It features more than 150 easy recipes for delicious French comfort food. Hamersley says he wants everyone to know that bistro cooking is fun, simple, and delicious.

The Saturday Early Show gave Gordon Hamersley a $30 budget, challenging him to create a delicious three-course meal for four with recipes from his new book.

Hamersley's Bistro has been a popular and critically-acclaimed fixture on the Boston dining scene. Hamersley opened the restaurant in 1987 with his wife Fiona. He trained with Wolfgang Puck at the famed Ma Maison in Los Angeles. He then trained for a year in Nice, learning everything he could about French bistro cooking. "Hamersley's Bistro" is his first cookbook.

Hamersley's menu as our Chef on a Shoestring: an appetizer of Creamless Yet Creamy Garlic Soup; an entrée of Grilled Mackerel With Beets, Fennel and Lime Vinaigrette; and for dessert, Pear-Cranberry Crumble.

Barbara Boxer's Hair Through the Years

Blanching: Chef Hamersley blanches garlic for the soup. Blanching means to briefly place food (usually fruit or vegetables) into boiling water, then into cold water to stop the cooking process. Blanching firms up the flesh, loosens skins (as with peaches and tomatoes), and helps set the color and flavor.

Mackerel: Hamersley uses mackerel for his main course. Mackerel is one of several species of fish found in the Atlantic Ocean off both the North American and European coasts, according to the "Food Lover's Companion." Mackerel has a savory flavor with a firm, high-fat flesh. Small mackerel is sold as whole fish, but the larger ones are sold cut into fillets or steaks.

Fennel: Hamersley uses fennel (and beets) to serve along with the mackerel. There are two main types of this aromatic plant, both with pale green, celery-like stems and bright green, feathery foliage. Florence fennel, also called finocchio, is cultivated throughout the Mediterranean and in the United States. According to the "Food Lover's Companion," it has a broad, bulbous base that's treated like a vegetable. Both the base and stems can be eaten raw in salads or cooked in a variety of methods such as braising, sautéing or in soups. The fragrant, graceful greenery can be used as a garnish or snipped like dill and used for a last-minute flavor enhancer. This type of fennel is often mislabeled "sweet anise," causing those who don't like the flavor of licorice to avoid it. The flavor of fennel, however, is sweeter and more delicate than anise and, when cooked, becomes even lighter and more elusive than in its raw state.

According to the "Food Lover's Companion," although common fennel is bulbless, its stems and greenery are used in the same ways as those of Florence fennel. Fennel is available from fall through spring. Choose clean, crisp bulbs with no sign of browning. Any attached greenery should be a fresh green color. Refrigerate, tightly wrapped in a plastic bag, up to 5 days. Fennel is rich in vitamin A and contains a fair amount of calcium, phosphorus and potassium.

Fennel Seeds: Hamersley also uses a pinch of crushed fennel seeds. The seeds are available whole and ground and are used in both sweet and savory foods, as well as to flavor many liqueurs. As with most seeds, they should be stored in a cool, dark place for no more than 6 months.

Recipes
All recipes are found in "Bistro Cooking at Home" by Gordon Hamersley with Joanne McAllister Smart, October 2003, Published by Broadway Books

Blanching the garlic not only makes the cloves easier to peel, but it also protects against the garlic becoming bitter as you sauté it. If you buy garlic that's already peeled, don't skip the blanching step. For a crunchy garnish, cook thin slices of garlic in oil over low heat until crisp. Drain the slices on a paper towel and sprinkle with salt.

Break apart the garlic into cloves by pressing firmly down on the side of the head with your hand. Discard any loose skins. Put the garlic in a soup pot; cover with water. Bring to a boil, lower to a simmer, and cook over medium heat for 5 minutes. Drain the water and then rinse the garlic under cold running water for about 30 seconds. When cool enough to handle, remove the skins.

Put the garlic back in the clean soup pot. Add the olive oil and cook over medium heat until the garlic begins to brown. Add the potato, thyme, salt, white wine, chicken broth and 2 cups water. Bring to a boil, lower to a simmer and cook until the potato and garlic are very tender, about 1 hour.

Working in batches, purée the soup in a blender until smooth. Return the soup to a clean pot, add the spinach, if using, and bring to a boil. Serve the soup topped with sautéed garlic slices, if you like.

The acid in the lime helps to counter the mackerel's rich flavor, while the natural sweetness of the beets gives the dish balance. Orzo, tossed with a little of the lime vinaigrette, is also good accompaniment.

Heat the oven to 375 degrees F. Place the beets in a small baking pan and toss with just enough olive oil to coat lightly, about 1 teaspoon. Sprinkle with some salt and pepper and cover with aluminum foil.

Cook until tender when pierced with a knife, about 11-1/2 hours. When cool enough to handle, peel the beets with a paring knife and cut them into a medium dice. (Be careful, as beet juice can stain counters, towels, and even your hands; you may want to wear rubber gloves for this step.)

Cut the fennel bulbs into quarters lengthwise and then crosswise into 1.8-inch slices. Season with salt and pepper. Heat 2 tablespoons of the olive oil in a large sauté pan over medium heat. Add the fennel and cook on one side until golden brown. Turn the fennel over and lower the heat. Continue to cook until the fennel is tender, another 5 to 7 minutes.

In a small bowl, whisk together the lime juice, mustard, red pepper flakes, fennel seeds, and shallot. Whisk in the remaining 3 tablespoons olive oil in a slow, steady stream until an emulsion forms. Add the beets and fennel to the vinaigrette. Toss the vegetables to combine the flavors, taste, and add more salt, pepper, lime juice, or red pepper flakes as needed.

Heat the grill of your choice to high. Season the mackerel with salt and pepper. Oil the grill and put the fish on it skin side down. Cook until the skin is crisp and the fish begins to turn white around the edges, about 6 minutes. With a spatula, carefully turn the fish over. Continue to cook on the flesh side until the mackerel is just done, about another 2 minutes.

While the fish is cooking, divide the fennel and beet mixture among four plates. Place the mackerel fillets near the beets and drizzle with any remaining vinaigrette.

Wine suggestions: A tough dish to pair wine with, so I suggest a very good, preferably grand cru Riesling from Alsace, as they have an enormous range and good acid. They have enough fruit to stand up to the oiliness of the fish and some earthiness to go with the beets. Another option: a creamy Russian River Valley Chardonnay with light oak and lots of acid.

This is a great fall dessert. You could also make the crumble in individual ramekins; just check on it sooner, as it will likely cook more quickly in the ramekins.

In a stand mixer using the paddle attachment, combine the flour, oatmeal, brown sugar, and salt. Add the cold butter and mix on low speed until the topping just begins to come together and resembles large bits of chunky dough. (Do not mix so long that it comes together completely.) Transfer the topping to a shallow container, breaking it up a bit. Cover and refrigerate for at least 2 hours.

Heat the oven to 350 degrees F. Combine the pears, cranberries, lemon juice, vanilla, cinnamon, nutmeg, sugar, salt and flour. Toss the ingredients lightly to coat evenly and pour into a 1-1⁄2-quart baking dish. Top with the crumble topping, breaking up any large clumps with your fingers and spreading it evenly. At this point, there may be areas that aren't completely covered with topping, but don't worry because it will spread a bit as it bakes. Bake until the topping begins to brown and the filling is bubbling, about 40 minutes. Remove the crumble from the oven and let it cool somewhat before serving.