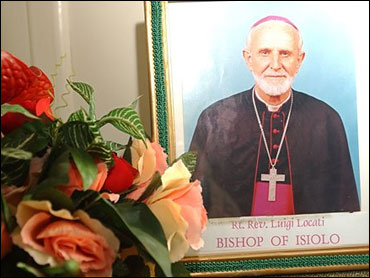 A Roman Catholic bishop was shot to death near his church in northern Kenya Thursday night, the Vatican Embassy in Nairobi said.

Bishop Luigi Locati, 76, was fatally wounded as he was walking to a pastoral center in Isiolo, in the country's north, where he was based, said the Rev. Julien Kabore, speaking by telephone from the Vatican Embassy in Nairobi.

"Unfortunately it is true, he died this evening," said Kabore, confirming an earlier report by a Catholic news agency.

Locati was taken to a hospital in Isiolo, where he died shortly after 8 p.m., about 90 minutes after the shooting, Kabore said.

A man who was walking with the prelate was wounded but his condition was not immediately known, said Kabore.

Other details were not available and the motives of the killing were unclear, he said.

But Kabore added that he didn't think it was linked to recent clashes in northeastern Kenya that have left some 75 killed. "For now we don't think it is linked," he said. "But it is not known."

News of Locati's killing had been reported earlier by the Rome-based Catholic missionary news agency MISNA.

Locati was born in Vinzaglio, a village in northern Italy. He was ordained a priest in 1952.

Locati was at least the second Roman Catholic priest to be killed violently in Kenya in recent years.

In 2000, an American priest, the Rev. John Kaiser, was found dead on the side of a busy highway between Naivasha and Nairobi, with a gunshot wound to the right side of his head.

Kaiser had been in Kenya for 35 years, and his death was widely believed to be related to his investigating and publicizing alleged human rights abuses in the country. Many politicians and human rights activists have called Kaiser's killing a political assassination, prompting authorities to launch an inquest into his death.