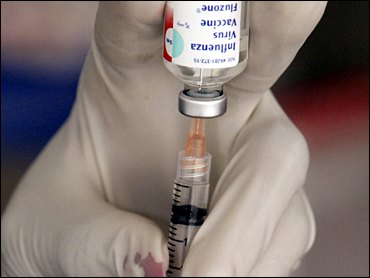 The vaccine is based on the deadly H5N1 strain of bird flu which has killed at least 69 people in Asia since 2003. Experts fear the virus, which has already jumped from birds to humans, could mutate into a form that is rapidly transmitted among people and cause a flu pandemic.

Scientists at Sanofi-Pasteur, the French pharmaceutical company developing the vaccine, said adding another ingredient to the flu shot seemed to boost the potency of lower doses. That would mean that supplies of the key element of the vaccine, known as the antigen, could be stretched further, allowing more people to obtain the shots in an emergency.

One of the major challenges in producing a vaccine suitable for a global flu pandemic has been the short supply of antigen.

Flu vaccine factories have the capacity to cater to the demands of regular flu seasons, when only a small proportion of the population gets shots. However, many more vaccines would be needed if there were a pandemic. One solution would be to build more factories or increase the production capacity of existing ones, but that takes time.

Another, quicker option is to develop technology that allows the manufacturers to use less antigen per dose of vaccine. Both options are being pursued in preparation for a possible flu pandemic, which experts agree is only a matter of time.

Seasonal flu vaccines, which combine the three most dominant strains, use about 15 micrograms of antigen per strain contained in the shot.

Researchers found that the H5N1 bird flu strain, the one scientists believe is most likely to spawn a potential pandemic, is so alien to the human body it takes two injections of vaccine using 90 micrograms of antigen apiece to get an adequate response from the human immune system.

In the latest study, an ingredient called alum was added to the vaccine in an attempt to reduce the amount of antigen needed in the shot. Scientists tested the new vaccine on 300 people and found they could get a decent immune response from two injections using only 30 micrograms of antigen each.

Provoking an immune system response is not proof the vaccine will protect against infection, but it is the first step. The other major problem, the need for two shots spread over weeks, also needs to be addressed.

In addition, it's impossible to perfect a pandemic flu vaccine before the pandemic starts because the vaccine must exactly match the strain, which is unknown until it arrives. However, much of the scientific groundwork, such as perfecting the dose and the amount of antigen needed, can be done using another flu strain.