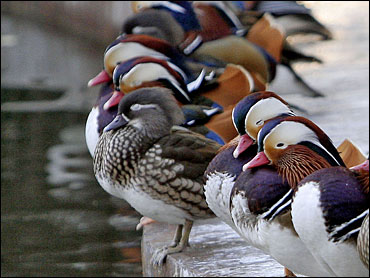 The World Health Organization called Wednesday for more investment in developing a vaccine to protect people from bird flu as China reported its fourth human case of the disease.

A 10-year-old girl in the southern region of Guangxi has tested positive for the H5N1 virus, the Chinese government said. She has been sick with a fever and pneumonia since Nov. 23 and has undergone emergency treatment, it said.

Experts have warned that the virus could mutate and become more easily passed between people, sparking a global pandemic that could kill millions.

Scientists in several countries are trying to develop a human vaccine for the disease, which will be even more important than antiviral drugs in containing it, said Henk Bekedam, the WHO representative in China.

"We strongly believe there needs to be more investment" in a vaccine, he told reporters. Governments need to get involved with efforts by pharmaceutical companies, perhaps promising to buy vaccines once they are developed, he said.

Three of China's four human cases, including the latest one, have been found in areas where outbreaks of bird flu were not reported.

This shows "there's still an issue of public awareness of what to look for when chickens get sick," Julie Hall, an infectious disease expert at the WHO office in Beijing, said this week.

China's public still needs to be educated about how to spot early signs of bird flu in poultry to prevent a further spread of the disease among birds and people, WHO officials said.

There was still no sign that bird flu can be passed between people, Bekedam said. Worldwide, there have been just over 130 human infections compared to more than 3,500 outbreaks in poultry, a small ratio, he said. "We do not think this virus is very clever in infecting humans."

Mainland China's first reported case of bird flu in poultry was in Guangxi, in January 2004.

People who have had close contact with the girl are under medical observation, but none have shown symptoms so far, Xinhua said.

China's Guangxi region borders hard-hit Vietnam, though there were no signs the virus came from there, Bekedam said.

Last month, two farmers in the eastern province in Anhui, both women, died of the disease after coming into contact with sick poultry.

A 9-year-old boy in central Hunan province was also sickened, but recovered and has been discharged from the hospital.

The virulent H5N1 strain of bird flu has killed at least 69 people in Asia since 2003, mostly through contact with infected birds.

China has mounted an aggressive campaign to fight repeated bird flu epidemics in poultry, which increase the potential risk of human cases. It is in sharp contrast to the initial secrecy authorities used to handle an outbreak of severe acute respiratory syndrome, or SARS, which emerged in Guangdong province in 2002.

Authorities have reported 25 bird flu outbreaks in poultry around China since Oct. 19 and have culled and vaccinated tens of millions of chickens, ducks and geese as a precaution.

"In this part of the world, it is well entrenched," he said. "It will not go away that easily."