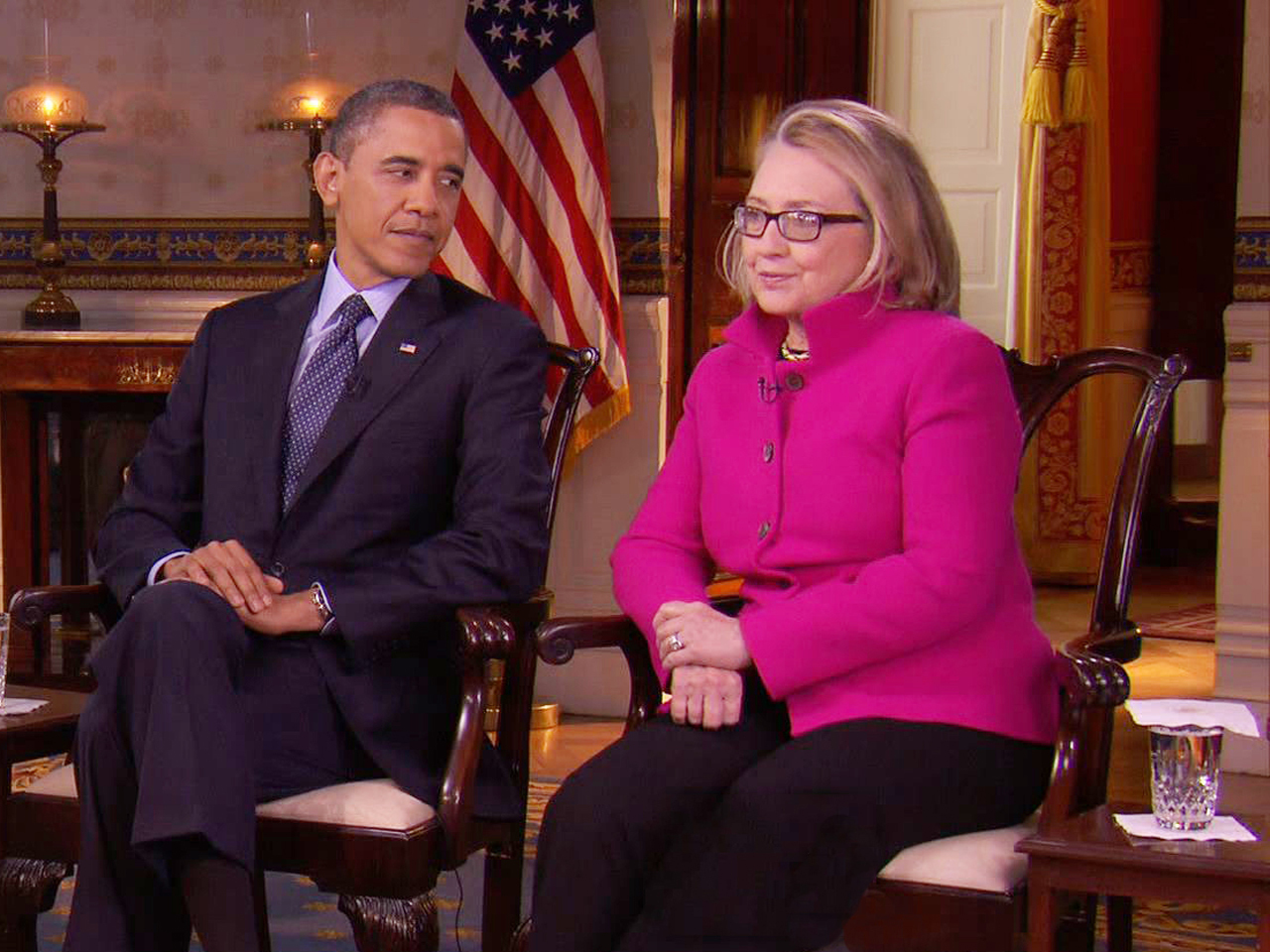 Kind words are coming from everyone - including Republicans - as Hillary Clinton steps down from her post as secretary of state.

She sat down for an exit interview with President Obama on Friday - their first joint interview ever, to air tonight on CBS' "60 Minutes" - and the two discussed Clinton's tenure at the State Department, their working relationship, and the evolution of their friendship in the aftermath of a bitter 2008 primary fight.

Mr. Obama hailed Clinton as "one of the finest" secretaries of state in American history, crediting her "hard work" with "a lot of the successes we've had internationally."

Clinton noted that their relationship today might seem "improbable" given the acrimony of the 2008 primary, but explained, "In politics and in democracy, sometimes you win elections and sometimes you lose elections. And I worked very hard and I lost. And then President Obama asked me to be secretary of state, and I said yes. And why did he ask me and why did I say yes? Because we both love our country."

Their decision to schedule a joint interview - the only joint interview Mr. Obama has done as president with someone other than First Lady Michelle Obama - has stoked speculation about Clinton's aspirations for 2016 and Mr. Obama's role in queuing up her decision.

Even Republicans seemed to go out of their way to praise the outgoing secretary of state.

Rep. Paul Ryan, R-Wis., the 2012 Republican vice presidential nominee and possible future presidential contender himself, lauded both Hillary and Bill Clinton on NBC's Meet the Press, arguing, "Look, if we had a Clinton presidency, if we had Erskine Bowles as Chief of Staff of the White House or president of the United States, I think we would have fixed this fiscal mess by now. That's not the kind of presidency we're dealing with right now."

It is not clear whether Ryan was talking about a Bill Clinton or Hillary Clinton presidency, but it was eminently clear that he thought both Clintons would be better fiscal stewards than Mr. Obama.

Some Republicans aggressively questioned her at a Foreign Relations Committee hearing last week and tried to blame the attacks on the U.S. consulate in Benghazi and the government's controversial explanation afterwards on Clinton, but Corker absolved her of any culpability in the tragedy, noting, "The deception around the Benghazi issue did not come from the State Department and no doubt emanated from Susan Rice on this program and on others...It was more of a White House political operative deception that was carried out, not from the State Department."

"I understand the point she was making," he added.

The State Department confirmed today that February 1 will be Clinton's last day as Secretary of State.