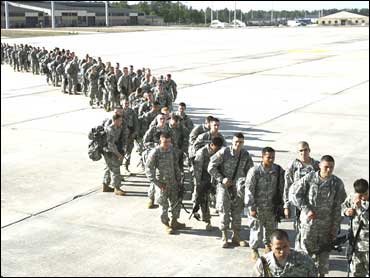 President Bush's plan to send more troops to Iraq is already running into trouble on Capitol Hill, with Republicans joining Democrats in raising eyebrows before the president even has a chance to make his case.

Next week Bush will unveil a new Iraq strategy that entails political, military and economic steps to win the war. The military solution, which has attracted the most attention and skepticism from Congress, is expected to include an increase in U.S. troops, possibly 9,000 additional troops deployed to Baghdad alone.

"Based on the advice of current and former military leaders, we believe this tactic would be a serious mistake," Reid said in the Democratic radio address Saturday. Instead, Reid and Pelosi want Bush to begin pulling troops out in four to six months.

"Our troops and their families have already sacrificed a great deal for Iraq," Reid said. "They have done their part. It's time for the Iraqis to do their part."

Bush told more than a dozen senators Friday that he would settle on the option only if the Iraqi government offered certain guarantees, according to senators who attended the meeting.

While lawmakers said they were willing to wait and see the entirety of Bush's plan before dismissing it entirely, members — including some Republicans — said they remained deeply skeptical about sending more troops.

"My conclusion was that it would be a mistake to send more troops to Baghdad. I think the sectarian violence there requires a political, not a military, solution," said Sen. Susan Collins (R-Me.), who had not had a chance yet to meet with the president.

Rep. Heather Wilson (R-N.M.), an Air Force veteran and member of the House Intelligence Committee, said she would not support increasing troop levels "to do for the Iraqis what the Iraqis will not do for themselves."

"I also have not seen a clarity of mission, and I think that's the greatest weakness that we have right now," Wilson said. "We're talking about goals in lofty terms that are not vital American national interests. American troops should only go in harm's way to protect America's vital interests."

Even Sen. John McCain, a Republican who advocates sending more troops in Iraq, said he wouldn't support sending in the additional forces unless the number was adequate enough to finally tamp down the violence.

"I need to know if it's enough or not," McCain said.

McCain (R-Ariz.) and Sen. Joseph Lieberman (I-Conn.) said they think at a minimum another three to five brigades should be sent to Baghdad and one more to Anbar province. About 3,500 troops are in a brigade. About 140,000 U.S. troops are in Iraq now.

Sen. Ben Nelson, who was among the small group of senators who met with the president Friday, said he felt Bush was aware of the high stakes and knew he would have to sell any plan to the American public. Bush suggested to the senators there would be "the expectation of the Iraqis carrying out their part of the deal 'or else,'" said Nelson (D-Neb.).

But Nelson said he and others remained reluctant to endorse any plan that would further stretch the military.

"I don't think there was anything partisan about the skepticism," he said.

Briefings with lawmakers were expected to continue through next week, culminating in a meeting with bipartisan leadership Wednesday, according to lawmakers and aides.

To implement his changed policy in Iraq, Bush is tapping new generals to lead the military campaign.

Lawmakers said they were pleased with Bush's selections.

"I hope he matches it with a new strategy that will shift responsibility for security to Iraqis and begin the responsible redeployment of American forces," said Rep. Ike Skelton (D-Mo.), chairman of the Armed Services Committee.