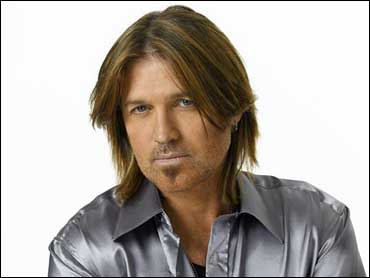 Billy Ray Cyrus, who said appearing on "Dancing With the Stars" was "the scariest thing I could possibly think of to do," has bid farewell to the ballroom.

The 45-year-old singer and actor was eliminated from the ABC dance-off Tuesday. He seemed to know his time was up before the results were announced.

"This is a celebration tonight," he said early in the show. "I got to meet my hero, Muhammad Ali, last night. I conquered my fear. I'm happy to be here and I'm ready to go on Jimmy Kimmel."

Each week, Kimmel interviews the eliminated celebrity dancer on his late-night show.

Ali made a rare public appearance Monday, coming to "Dancing With the Stars" to watch his daughter, Laila Ali, perform the waltz and the jive.

2Cyrus danced the mambo and the foxtrot, which judge Bruno Tonioli called "crap."

"You are always deliciously awful," he told Cyrus, who also placed in the bottom two last week. He and his professional partner, Karina Smirnoff, earned this week's lowest score.

"If by any miracle you remain in this competition," Tonioli continued, "she's going to end up in Betty Ford."

Judges' scores are combined with viewer votes to determine which couple is eliminated each week.

Tuesday's results show also featured a performance by Grammy winner Nelly Furtado, who sang her breakthrough 2000 hit, "I'm Like a Bird" and her new single, "All Good Things."