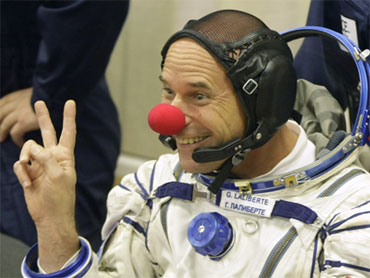 A billionaire Canadian circus tycoon is on his way to the International Space Station.

Laliberte, U.S. astronaut Jeffrey Williams and Russian cosmonaut Maxim Surayev got a rousing sendoff from friends and family at the Russian launch facility on the Kazakh steppe. They are expected to arrive at the orbital outpost Friday.

CBS News space consultant Bill Harwood reports that the 9-minute ascent went smoothly as the launcher arced across the sky to the east, shedding its liquid-fueled strap-on boosters and core stages without incident.

In live television views from inside the spacecraft's central compartment, Laliberte could be seen smiling and giving ground controllers an enthusiastic thumbs up, telling Suraev he felt "super," reports Harwood.

Laliberte plans to help publicize the world's growing shortage of clean water. But he's also doing his best to make the trip fun. The entertainer donned a bulbous red clown nose before boarding the capsule and brought several of the novelty noses for his crew mates.

Two days before the launch, Laliberte cracked jokes, donned his trademark red nose and flashed with enthusiasm over the venture that he wants to be both entertaining and educational.

"In my life I have been doing a lot of fun, crazy and adventurous things, but this is totally the biggest adventure I have ever embarked on," the Canadian told The Associated Press by telephone from behind the glass wall protecting him and two other astronauts from contamination at Russia's Baikonour Cosmodrome.

"Like many kids, I grew up in the generation of space exploration. But I remember that back then, what overcame me was not the desire to travel in space, but the belief that fairy tales were possible, and that kind of shaped my way of seeing life," he said. 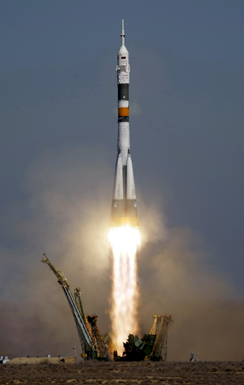 (AP Photo/Mikhail Metzel)
Other space tourists have used their time at the space station to conduct scientific experiments, but Laliberte has different aims for his 12 days aboard the orbiting lab.

At left: The Soyuz-FG rocket booster with the Soyuz TMA-16 spacecraft carrying Guy Laliberte and two other crew members to the international space station (ISS) blasts off from the Russian-leased Baikonur Cosmodrome, Kazakhstan, Sept. 30, 2009.

"I am not a scientist, I'm not a doctor, I'm not an engineer," he said. "I'm an organizer, a showman, and a creator - I have an entertaining personality, so that is really what I am bringing here."

Laliberte, 50, started as a street performer and rose to an estimated net worth of $2.5 billion after founding the innovative and globally popular Cirque du Soleil. The trip to the International Space Station is costing him $35 million.

He sees the expenditure in part as an effective marketing opportunity.

"I am the type of person who is always trying to maximize an investment, and this is the 25th anniversary of Cirque du Soleil, which will be a celebration for us," he said.

But along with that, Laliberte also aims to use the trip to promote awareness of world water supply problems.

On Oct. 9, he will lead a "poetical social" performance from aboard the International Space Station for the One Drop Foundation, an organization he set up in 2007.

"I start with the simple idea of reading a poem, which will involve characters like the sun, the moon and a drop of water," he explains. "Those characters will then engage in a discussion, which will take the form of a little poetic story that we will read to the population of earth."

Activists and celebrities, including former U.S. Vice President Al Gore and Colombian pop star Shakira, are to contribute to the performance from 14 cities worldwide, and all of it is to be shown on the foundation's Web site.