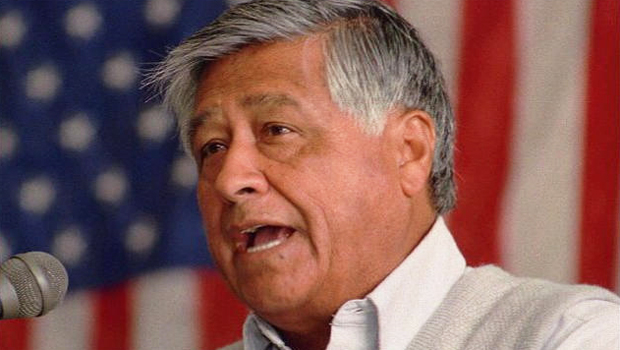 When I was a candidate for Congress in my late twenties I was invited to a rally with Cesar Chavez in Santa Fe, N.M. He was doing a rally in favor of hospital workers because they needed to be unionized.

At that event he not only inspired me by his commitment to civil rights, but his speechmaking, his ability to arouse the audience and ability to connect with them -- but mainly by his personal gentility.

As someone of Mexican-American background, I had always heard of Cesar Chavez. I had always known about his struggle in California. But it was the first time I saw him. He was a small, slight man, yet he had a voice -- while it was soft -- that carried enormous stature and enormous commitment to civil rights. I saw how he inspired the hospital workers, and that incident made me into a true civil rights advocate, not just for Hispanics and working people but across the board.

Cesar Chavez is the inspiration for my commitment to civil rights. I then went on to win an election (the first race I lost), and I became actively committed on behalf of civil rights issues as a member of the Congressional Hispanic Caucus.


When it comes to equality, what issues are most important to you?

I am very proud of one incident when I was governor. That was the issue of gay rights and specifically transgender rights. I'm proud to say that I may have been the first governor to give rights to transgender people in the mid-2000s. I recall bringing in a number of leaders into my office from the gay rights movement saying I was going to propose legislation and executive orders to make it easier for gay people to have insurance, to have protection and housing, to have basic civil rights. I recall looking at somebody who had helped me in my campaign -- his name was Rudy. He was a transgender individual. I said to him, "Rudy, why are you not happy? You're not smiling." He said to me, "Because what you're doing does not cover me. I'm transgender."

I said "Well, what does that mean?"

He said, "It means the transgender community has been ostracized from the gay community. They don't want to include us, and I wish you would, Governor."

I remember Rudy going door-to-door for me in a very conservative community, and I said to my team and my staff, "Lets include transgender people. I want to help Rudy." And I recall my staff recoiling, saying, "Don't do this because the bill will go down. We have to work harder on transgender people down the road." I said no, we'll do it now.

We did it now, and we got it done.

That was an incident where I became sensitized to gay rights issues, not just the traditional gay rights objectives, but the rights of transgender people.

What needs to happen in the next 50 years for equality to be fully realized in the US?

I believe that same-sex marriage has to become national, and has to be operational and legal in every state. While it's better to do it with a Congressional Act, I think the states and the American people are far ahead of anybody else. They will make it happen, and I suspect in five to seven years every state will permit same-sex marriage.

I also believe it's important, beyond the issues of gay rights and civil rights, that we continue to talk about race, and continue to be a country where we end racial discrimination across the board. Not just for African-Americans, but Hispanics and any kind of ethnicity, gender, any kind of difference from the typical American. This is something where I believe the American people are evolving faster than the politicians.