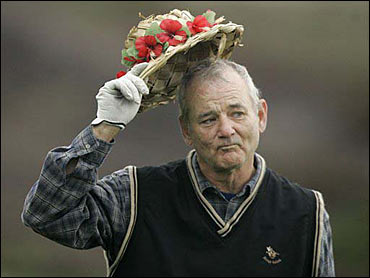 For Bill Murray, acting as a golf cart-taxi driver and dropping off fellow partygoers was a nice gesture. But the Stockholm police didn't think so.

The police "asked me to come over and they assumed that I was drunk and I explained to them that I was a golfer," Murray told reporters Monday at the Venice Film Festival, where he appeared before the premiere of his new film, "The Darjeeling Limited."

The actor-comedian, who was among the early cast members on NBC's "Saturday Night Live" and was nominated for an Oscar for 2003's "Lost in Translation," said he was in Stockholm last month to play in a pro-am golf tournament and hitched a ride to a post-event party in a golf cart.

When no one wanted to drive home, he volunteered.

"I ended up stopping and dropping people off on the way like a bus. I had about six people in the thing and I dropped them off one at a time and as the last couple were getting out, who wished to be dropped off at a 7-Eleven. ... I didn't know they had 7-Elevens in Stockholm," said Murray, who turns 57 on Sept. 21.

That's where police called him over.

Swedish police took a blood test after he refused a breath test. He could face drunken driving charges, though a Stockholm police official has said fines were more likely than a prison sentence.