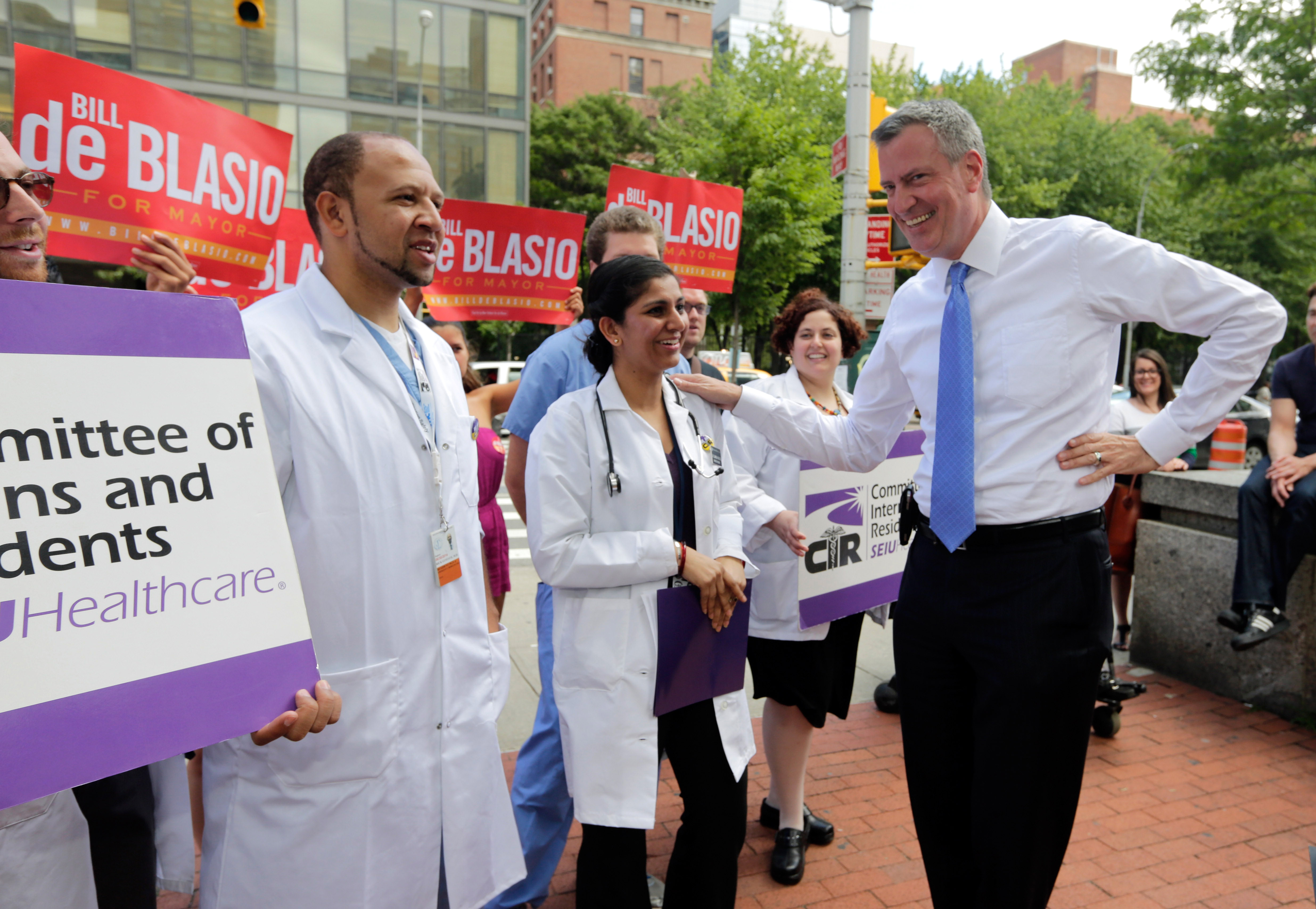 The most liberal candidate in the New York City mayoral race, whose City Hall bid was floundering mere weeks ago, now enjoys a shocking perch atop the polls in the latest turn of the most unpredictable citywide campaign in decades.

And with the Democratic primary now less than a month away, de Blasio may have hit his stride at just the right time.

De Blasio, the city's public advocate, has been given a second look by an electorate that appears intrigued by his progressive policies and charmed by his multiracial family. His first TV ad, narrated by his soft-spoken 15-year-old son, came out just before his rise in the polls.

De Blasio, of Brooklyn, has also clearly benefited by the implosion of Anthony Weiner's candidacy, winning over legions of supporters turned off by the former Brooklyn and Queens congressman's latest sexting scandal.

"When Weiner entered the race, de Blasio was the most hurt, since they were both outer borough candidates appealing to the same progressive voters," said Jeanne Zaino, a New York University political science professor. "Those people have now turned to him."

Independent Mayor Michael Bloomberg's impending departure after 12 years in office has created a wide-open race; the Democratic field alone has had three different leaders in as many weeks.

A Quinnipiac University poll this past week showed that de Blasio's support had doubled in less than a month, pushing him from fourth to slightly ahead of the pack. A second poll released this week showed him in a dead heat with City Council Speaker Christine Quinn, with ex-comptroller Bill Thompson slightly behind. Weiner, once the leader, is now fourth.

De Blasio, 52, believes it was simply a matter of time before his message resonated with left-leaning voters in New York City, where Democrats outnumber Republicans 6 to 1.

"It's happening now because people are finally starting to focus on the race," de Blasio told The Associated Press. "After 12 years of Mayor Bloomberg, people want a real change."

De Blasio, though largely unfamiliar on the national stage, has been a fixture for two decades in New York politics.

It is rare to find a candidate who appears almost gleeful when proposing raising taxes, but de Blasio has happily made as the centerpiece of his campaign a proposal to raise taxes on the wealthy to pay for universal pre-kindergarten.

He repeatedly brandishes the phrase "A tale of two cities" to rip the economic inequality between the rich and poor in the nation's largest city. He often bashes Quinn's links to Bloomberg and calls for more affordable housing.

And he has consistently attacked the New York Police Department's stop-and-frisk program — stopping and searching people deemed to be acting suspiciously — as discriminatory to blacks and Hispanics, an effort handed a victory this past week when a judge appointed a federal monitor to oversee the department.

De Blasio has aggressively courted minority voters, who are expected to make up more than 50 percent of the electorate on primary day Sept. 10. He has won endorsements from several black and Latino elected officials and the city's largest labor union, composed largely of minority workers.

He also has put his interracial family at the heart of his campaign.

His wife is an African-American who once identified as a lesbian, and their two teenage children are frequently on the campaign trail.

Their son, Dante, lovingly talks in the ad about his father's life and policies, including his opposition to stop-and-frisk. His earnest delivery and impressive Afro have made him a Twitter star, leading to the light-hearted hashtag (hash)fromentum.

"It's very effective and uses his family well," said Zaino, who noted that many New Yorkers have "Bloomberg fatigue" and such an ad is unlike anything the mayor would have done.

One of de Blasio's challenges — one harped upon by his rivals — is to explain what, exactly, his job as public advocate entails. The position was created in 1993 to be the city's watchdog, but it has little real power.

One recent crisis, though, allowed de Blasio to finally show off what his office can do. He fought the state university system's plan to close a Brooklyn hospital, staging a series of protests and even getting arrested at one. He secured a restraining order to keep the hospital open.

"He's peaking at the right time," said Jamie Chandler, political science professor at Hunter College. "But the race is still close — anything can happen."