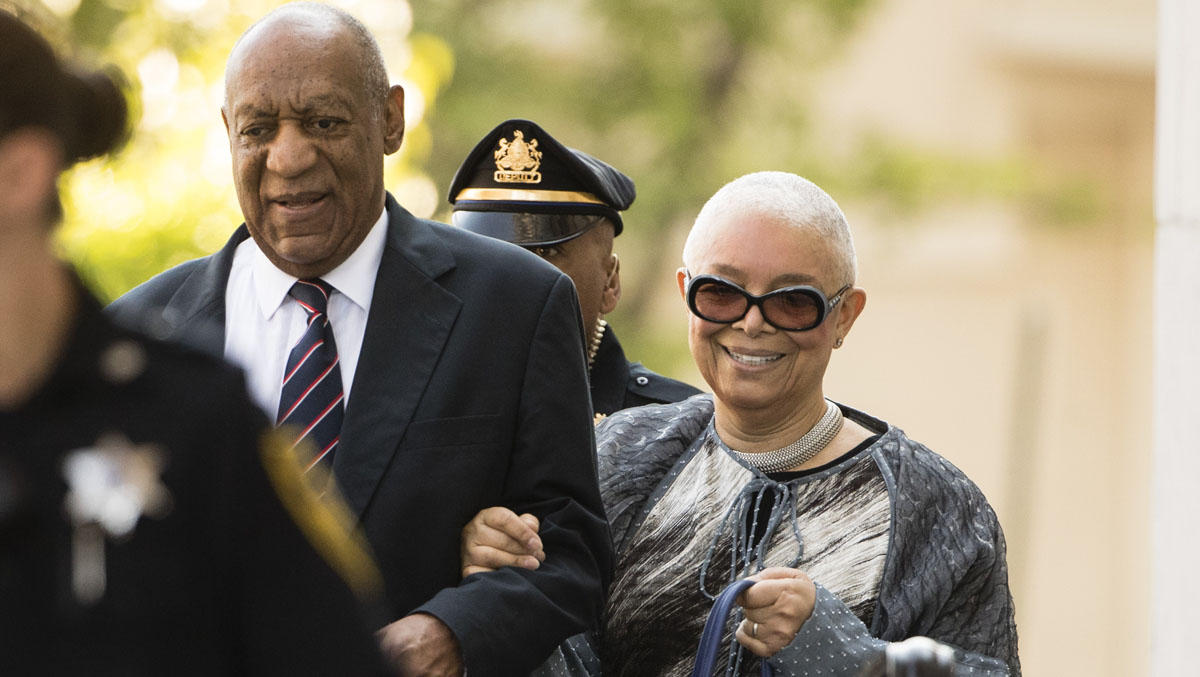 NORRISTOWN, Pa. -- Bill Cosby's trial raced toward a close Monday, with his lawyer telling the jury that the comedian and the woman who accuses him of drugging and molesting her more than a decade ago were lovers who had enjoyed secret "romantic interludes."

Prosecutors countered by saying "fancy lawyering" can't save Cosby from his own words -- namely, his admission about groping Andrea Constand at his suburban Philadelphia estate after giving her pills he knew could put her to sleep.

"Drugging somebody and putting them in a position where you can do what you want with them is not romantic. It's criminal," District Attorney Kevin Steele said in his closing argument.

The jury of seven men and five women was handed the case Monday and began deliberations, but didn't reach a verdict by late Monday evening after four hours. They resumed Tuesday morning.  A conviction could send the 79-year-old Cosby, once one of the most beloved entertainers in all of show business, to prison for the rest of his life.

The two sides launched into their closing arguments after the defense put on a case that consisted of just one witness -- a detective -- and six minutes of testimony. Cosby himself chose not to take the stand, ending days of suspense over whether the jury would hear directly from him.

Legal experts said testifying would have been a risky move that could have opened the TV star to withering cross-examination about some of the 60 or so other women who have accused him of drugging or molesting them in a barrage that has all but destroyed his nice-guy image.

Cosby lawyer Brian McMonagle said that while the comedian had been unfaithful to his wife, he didn't commit a crime. He said that the comic's 2004 sexual encounter with Constand was consensual and that they had been intimate before.

McMonagle also pointed out that Constand telephoned Cosby dozens of times after the alleged assault. Constand told the jury she was merely returning his calls about the women's basketball squad at Temple University, where she worked as director of team operations and he was a member of the board of trustees.

"This isn't talking to a trustee. This is talking to a lover," McMonagle said of one call that lasted 49 minutes. "Why are we running from the truth of this case -- this relationship? Why? I don't understand it."

Cosby's wife of 53 years, Camille -- in the courtroom for the first time in the 6-day-old trial -- was stoic during the defense argument but left when it was the prosecution's turn. She sat in the front row, across the aisle from Constand, who didn't react to McMonagle's two-hour closing but smiled at the end of it.

Constand, 44, testified last week that Cosby gave her three blue pills and then penetrated her with her fingers against her will as she lay paralyzed and half-conscious. She denied they had a romantic relationship and said she had rebuffed previous advances from him.

She sued Cosby after prosecutors in 2005 declined to press charges. Cosby testified over a decade ago as part of that lawsuit, eventually settling with her for an undisclosed sum.

His deposition was sealed for years until a judge released parts in 2015 at the request of The Associated Press, prompting a new set of prosecutors to take a fresh look at the case and charge him.

McMonagle told the jury that Cosby's freedom is at stake now, not just his finances. "This is not a civil case about money, money, money. We're talking about all the man's tomorrows," he said.

In the prosecution's closing argument, Steele said that Cosby's lurid statements from 2005 helped corroborate Constand's allegations. Steele also reminded jurors about a telephone conversation in which Cosb apologized to Constand's mother and described himself as a "sick man."

"This is where all the fancy lawyering can't get you around your own words," Steele said.

McMonagle used a big screen to show jurors how Constand's story evolved in her interviews with police, noting that she was off by two months on the date of the alleged assault and inaccurately told police she had never been alone with Cosby before.

In his 2005 deposition, Cosby said he obtained several prescriptions for quaaludes in the 1970s and offered the now-banned sedatives to women he wanted to have sex with.

He also said he gave Constand three half-tablets of the cold and allergy medicine Benadryl before the "petting" began. Prosecutors have suggested he drugged her with something stronger -- perhaps quaaludes.

The sole witness for the defense was the detective who led the 2005 investigation, Richard Schaffer, who previously took the stand during the prosecution's case.

Schaffer testified this time that Constand had visited with Cosby at an out-of-state casino before the alleged attack and that police knew he had vision problems more than a decade ago. Cosby has said he is legally blind because of glaucoma.

The Associated Press does not typically identify people who say they are victims of sexual assault unless they grant permission, which Constand has done.