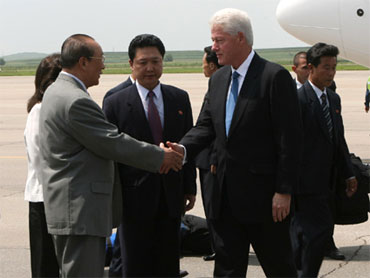 Former U.S. President Bill Clinton made a surprise trip to North Korea on Tuesday amid an international standoff over the country's nuclear program and concerns about two U.S. reporters imprisoned in Pyongyang since March.

Clinton landed in Pyongyang in an unmarked jet Tuesday and was greeted at the airport by North Korean officials, including chief nuclear negotiator Kim Kye Gwan and vice parliamentary speaker Yang Hyong Sop, footage from APTN Pyongyang showed. He smiled and bowed as a young girl presented him with flowers.

The unannounced visit comes amid heightened tensions over North Korea's string of nuclear and missile tests in defiance of the U.N. Security Council and calls from Washington for amnesty for the two jailed reporters.

CBS News foreign affairs analyst Pamela Falk says Clinton's visit could be, in the minds of the North Koreans, equivalent to direct talks with the U.S., owing to his unique connection to the Obama administration.

Laura Ling and Euna Lee, who work for former Vice President Al Gore's California-based Current TV media venture, were arrested in March while on a reporting trip to the Chinese-North Korean border. They were sentenced in June to 12 years of hard labor for entering the country illegally and engaging in "hostile acts."

Politico.com reported Tuesday that, according to an unnamed source in Washington, the North Korean regime has said it will hand over the two journalists to Mr. Clinton. The report claims family members asked the Obama administration to send the former president, a mission which was approved after weeks of secret planning.

Last month, U.S. Secretary of State Hillary Rodham Clinton - Bill Clinton's wife - requested amnesty for the women, asking that they be allowed to return to their families in California.

"Because of his history with North Korea, former President Clinton could be just the right man for the job," says Falk. (Read more from Falk on what could be one of Bill Clinton's toughest tasks yet.)

"Both sides are looking to win," said Zarate, who adds that North Korea has seemingly achieved exactly what they had hoped to by detaining the Americans and using them as pawns; "High level recognition."

Both reporters are married, and Lee has a 4-year-old daughter. Negotiations for their release are believed to have taken place behind the scenes since Washington and Pyongyang do not have diplomatic relations. 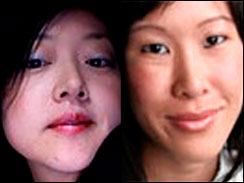 That visit also occurred at a time of spiraling nuclear tensions - and led to a breakthrough accord between the two sides just months later.

CBS News correspondent Barry Petersen reports that North Korea's chief nuclear negotiator was also at the airport to greet Clinton on Tuesday - a sign that this visit may be about more than just bringing home two American women.

"I think it's not just about journalists. It will serve as a turning point in the U.S.-North Korea relations," he said.

North Korea's official Korean Central News Agency confirmed Clinton's visit with a brief dispatch. The report did not say who Clinton would be meeting.

In New York, the Clinton Foundation did not immediately return calls, and Gore's spokeswoman, Kalee Kreider, said she could not comment. At the White House, Deputy Press Secretary Tommy Vietor said he had no comment.

The last high-ranking U.S. official to meet with Kim Jong Il was Madeleine Albright, then Clinton's secretary of State, who visited Pyongyang in 2000 at a time of warming relations. Ties turned cold when George W. Bush took office in the White House in 2001.

Since President Obama took office, Pyongyang has expressed interest in one-on-one negotiations with Washington while insisting it will not return to six-nation nuclear disarmament negotiations involving China, Japan, the two Koreas, Russia and the United States.

The United States says it is willing to hold bilateral talks with the North, but only within the six-nation framework.

North Korea has rapidly escalated tensions this year. It conducted a long-range rocket launch, quit the disarmament negotiations, restarted its nuclear facilities, carried out its second-ever nuclear test and test-fired a series of ballistic missiles.

As a way to pressure North Korea to return to the negotiating table, Washington has been seeking international support for strict enforcement of a U.N. sanctions resolution adopted to punish the North for its May 25 nuclear test.

There are also questions about Kim's health. Now 67, he reportedly suffered a stroke about a year ago, on top of chronic diabetes and heart disease. Kim, who rules the nation of 24 million with absolute control, is believed to be preparing to name a son as his successor.