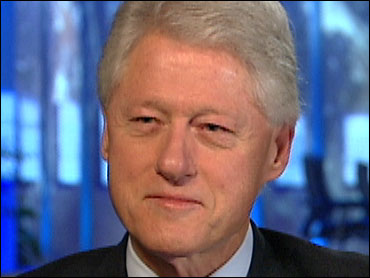 (CBS)
Former President Bill Clinton visited Central Intelligence Agency headquarters today to express his gratitude to employees and thank them for their role in protecting the United States against foreign threats.

"I think it's critical to meeting the challenges that we face today and the ones we're likely to face tomorrow. I guess that's the most important thing I can say—that I am grateful to all of you for your service here," Mr. Clinton said.

Mr. Clinton was also briefed on counterterrorism and regional hotspots by senior analysts at CIA headquarters. He said staffers are "trying to stop the big bad things from happening, trying to limit the damage from the bad things that do happen, and trying to keep moving the world in the direction it should go."

CIA director Leon Panetta complimented Mr. Clinton for his understanding of the CIA's role in intelligence gathering in the post-Cold War era.

"We certainly can benefit from the experience and perspective of a man who for eight years worked to defuse those dangers, protect our nation, and share the best of its ideals with the rest of the world," Panetta said.

Mr. Clinton also spoke about his experiences around the world after leaving office.