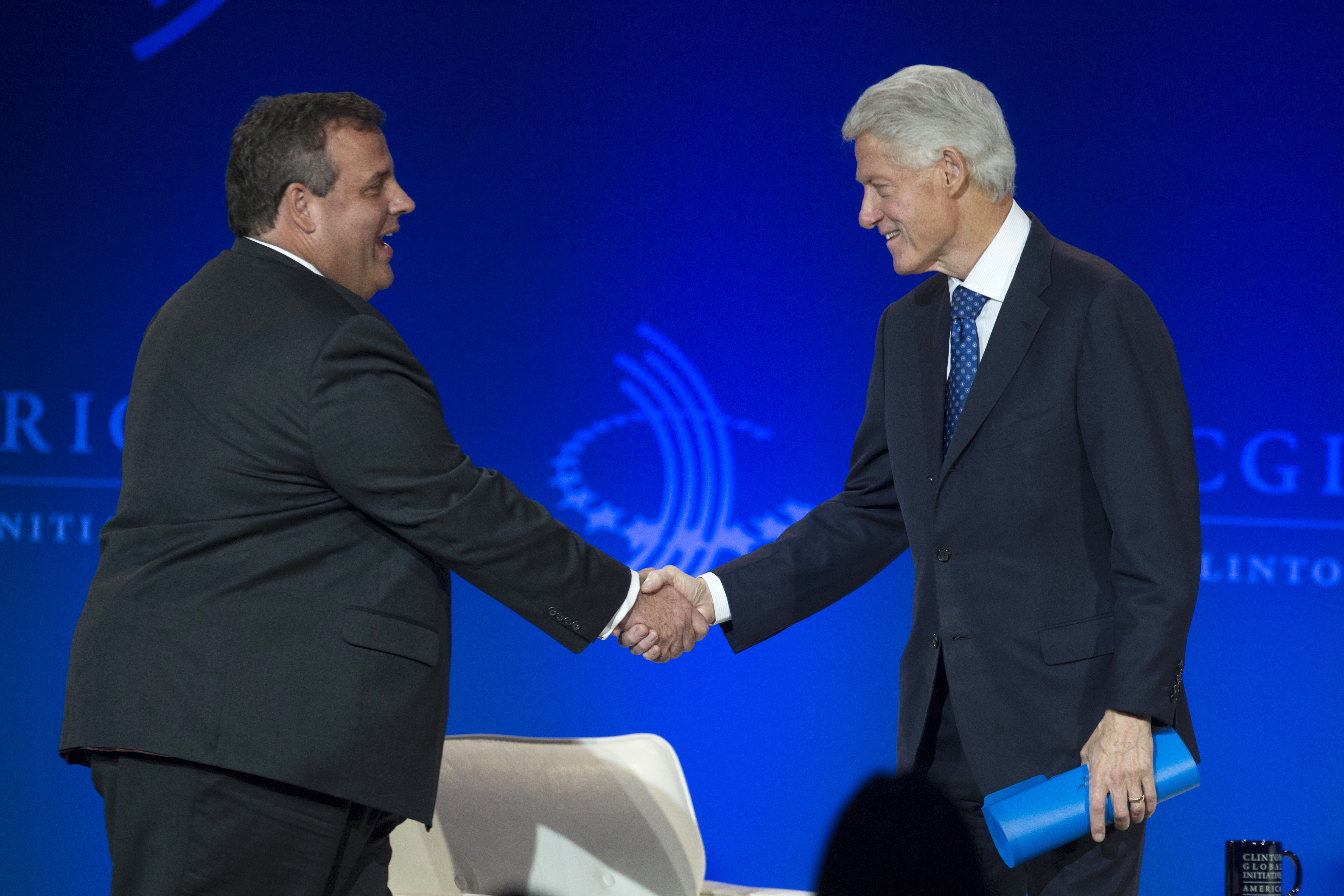 Sitting with the governor by his side, Mr. Clinton recalled Christie's response to Superstorm Sandy.

"The enduring image most Americans have of you is standing there in your jacket, grieving with people, working with them, working with the president," Mr. Clinton said. "You got both praise and damnation for ignoring political differences."

Now that Christie is helping his state prepare for the next storm, Mr. Clinton said, "this should be as unifying as that. We've got to stop waiting for something horrible to happen" before taking action.

Christie agreed, "This is one of those things where regardless of where you fall on the ideological spectrum, you would agree this is government's responsibility." He added that spending a few billion dollars to build up the dunes on the Jersey Shore was well worth it, given it could prevent tens of billions in flooding damage.

"Even if you have no interest in the subject, you're paying to restore the Jersey Shore," he pointed out. "It's an issue because of the number of people that live there and the expense associated with rebuilding the area."

While Christie was in Chicago Friday with the former president, other prominent conservatives were at the Faith and Freedom Conference in Washington. Christie's choice to be in Chicago rather than Washington was the latest example of his willingness to show good will toward Democrats at the potential expense of his reputation as a conservative. Last month, Christie and President Obama put their positive relationship on display when they toured the rebuilt New Jersey Shore playing arcade games with each other.

At Friday's event, Mr. Clinton acknowledged the risk he was taking, recalling that after sitting next to Christie at a basketball game, he thought to himself, "This is going to wreck this guy's career."

Still, there was little mention of politics at the event, and no hint that Christie -- should he decide to run for president -- could very well run against Mr. Clinton's wife, former Secretary of State Hillary Clinton.

The Republican Christie's moves may be orchestrated with his reelection bid in a solidly blue state in mind. Still, events like the Faith and Freedom Conference offer Christie the opportunity to build relationships with conservatives who could be key to his success in 2016 -- even three years before the 2016 election. He's already taken heat for his high-profile photo ops with Mr. Obama; by shunning high-profile conservative events, the governor risks offending stalwart conservatives or raising their suspicion even further.

Christie hasn't said whether he's running in the next presidential election, but he continues to keep a high national profile. He appeared this week on "Late Night with Jimmy Fallon," where he "slow jammed" his decision to call for a special election to fill New Jersey's vacant Senate seat.