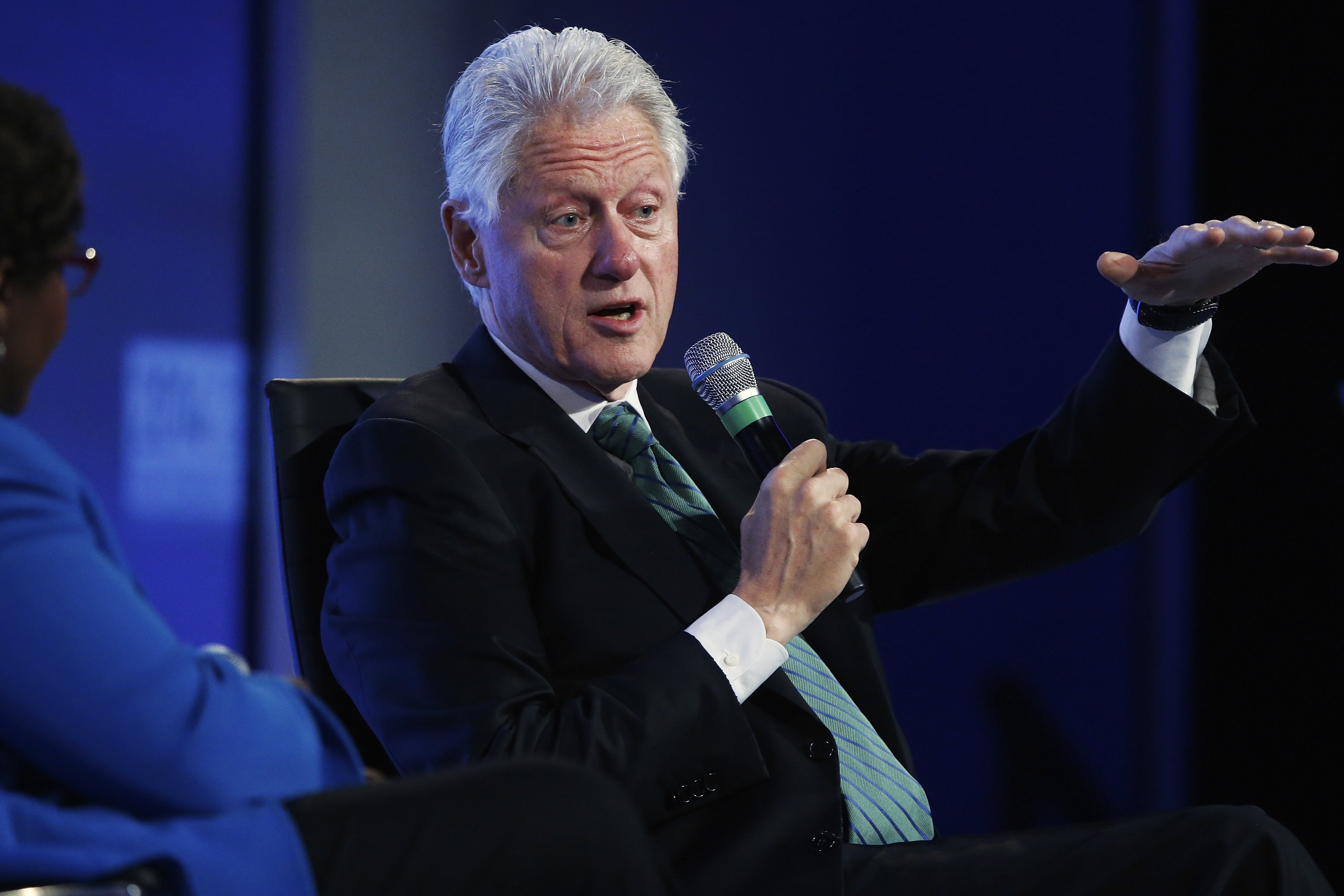 Former President Bill Clinton brushed off suggestions by Karl Rove that Hillary Clinton might have suffered brain trauma in the wake of a 2012 concussion - and took Rove to task for suggesting as much.

"That embodies that old saying that consistency is the hobgoblin of little minds. First they said she faked her concussion and now they say she's auditioning for a part on The Walking Dead," the former president said to laughter from the audience at the Peter G. Peterson Foundation annual fiscal summit.

But Clinton also said pledged that Hillary Clinton's health was in good shape and that she was honest with the American people about her illness.

"She works out every week, she is strong, she is doing great, as far as I can tell she's in better shape than I am. She certainly seems to have more stamina now and there's nothing to it," Clinton said during a question and answer session with PBS' Gwen Ifill. "I was sort of dumbfounded. They went to all this trouble to say she had staged what was a terrible concussion that required six months of very serious work to get over, something she never lowballed with the American people, never tried to pretend didn't happen. Now they say she's really got brain damage."

"If she is I must be in very tough shape because she's still quicker than I am," he added.

According to aides, Clinton contracted a stomach virus in early December 2012 and became dehydrated, leading the fall where she hit her head. She was diagnosed with a concussion on Dec. 13 and then spent several weeks out of the public eye. She was eventually admitted to New York-Presbyterian Hospital on Dec. 31 when doctors discovered the blood clot, located behind the right ear, during a follow-up exam stemming from the concussion. Doctors treated her with anti-coagulants to dissolve the clot.

After a 72-hour stay, Clinton was released from the hospital and she said she would return to work the following week. She appeared publicly to testify in a delayed hearing on the Benghazi attacks on Jan. 23.

Rove, President George W. Bush's former political strategist, reportedly suggested at a conference last week that Clinton suffered more extensive damage than the public was told when she suffered a fall in December 2012. She was officially diagnosed with a blood clot in her head caused by a concussion. But Rove suggested there might be something more insidious.

"Thirty days in the hospital? And when she reappears, she's wearing glasses that are only for people who have traumatic brain injury? We need to know what's up with that," Rove said, according to the New York Post's Page Six.

Rove later objected to characterizations of his comments as a suggestion that Clinton had brain damage. In an appearance on Fox News Tuesday, he said, "I didn't say she had brain damage. My point was, is that Hillary Clinton wants to run for president, but she would not be human if this didn't enter in as a consideration. And my other point is, this will be an issue in the 2016 race, whether she likes it or not."

Bill Clinton joked some of the theories might be related to a longtime Republican search for scandals related to his family. "I'm still waiting for them to admit there was nothing to Whitewater," he said, referring to the investigation that was conducted into a land deal while he was in office.

But he also said the questions are "just the beginning" if his wife runs for office.

"When a question is asked, it has to be answered in a serious fashion, if it raises a serious issue, even in a ridiculous way. After that, you just have to trust the people and go on and get back to the business of what's really in the public interest," he said.

Clinton also weighed in on the Benghazi scandal, which remains in the news as Republicans have created a select committee to continue their investigation.

"In my opinion, Hillary did what she should have done," Clinton said, pointing to the panel she created to review the State Department's actions.

"They looked into what was wrong, they gave 29 recommendations, she took them and started implementing them," he said.

He added his own advice for those who were being questioned by the GOP was to avoid being defensive and answer the questions. They should, "realize what this is," Clinton said.

When Ifill pressed him on what exactly the investigation is, Clinton resisted.

"Nah, you just want me to get in a political fight. I'm not running for anything - I'm not doing that," he said.

O'Rourke to Abbott at Uvalde presser: "You are doing nothing"
Rebecca Kaplan