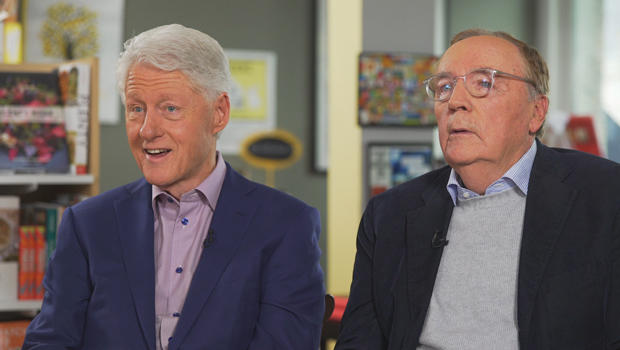 A political thriller has to convincingly blend both fact and fiction, which is just what a certain debut novelist with plenty of White House experience says he has to offer. He and his writing partner are talking with Mo Rocca:

Here's something you might expect a former president to do:  lead last weekend's hometown Memorial Day parade, in Chappaqua, N.Y. But Bill Clinton has just done something else you might not expect of an ex-president: "To me it was, first of all, exciting. And because I'd never done it before I told everybody, 'I'm an old dog, and this is a new trick.'"

That new trick?  Writing a political thriller, teaming up with author James Patterson.

Patterson has had a few bestsellers by now. Mr. Clinton joshed, "Yeah, if he keeps working at it, he's gonna amount to something!"

Actually, Patterson is already the best-selling author in the world, with more than 300 million books sold.

Mr. Clinton said, "I've consumed literally thousands and thousands of thrillers, political novels, all this kind of stuff. You know, he's just good at it. But I wanted it to be real. I want people – I didn't want anybody able to say, 'Oh, this is just made up bull,' you know?"

The result: "The President is Missing" (Little, Brown), in which the president takes on an international terrorist plot, at times single-handedly.

In the audio book, actor Dennis Quaid is the voice of the president:

"Every decision I make today is a risk.  We are on the high wire without a net. I make the wrong decision, either way, and we're screwed."

The president goes rogue, getting in the middle of a shootout at Nationals Park in Washington, and another shootout on the 14th Street Bridge.  But President Clinton and Patterson insist it's perfectly plausible.

Mr. Clinton explained, "We swapped these drafts back and forth. And I'd read something, and I'd say "Well, I don't think this works, this wouldn't really happen. But we've gotta make something happen and still keep it exciting.' And it's, like, how dumb is that, right?"

The terrorists' weapon is a cyber-attack that could wipe out our entire country's internet, and with it the systems that control virtually everything – tantamount to an act of war.

Mr. Clinton and Patterson see their story as not just a pager-turner, but as a warning about dangers they say we only got a taste of during the 2016 election.

"We got a real serious problem with the cyber terrorism that could go way beyond fixing the elections," Mr. Clinton said. "And those problems will happen faster if we allow our elections to continue to be tampered with by others."

Rocca asked, "Do you think there was any tampering in 2016, with results?"

"Right, because you described the water supply, obviously, financial systems, all these things that are vulnerable, like hospital records."

The book is written from the point of view of the president.

Rocca said, "I think a lot of people are going to read this book and think, 'Oh, this is President Bill Clinton!'"

Still, you can be forgiven for mixing up the two presidents. The book kicks off with the fictional President Jonathan Lincoln Duncan facing removal from office. You'd think impeachment would be the last thing William Jefferson Clinton would want to revisit when he reflects on his time in office.

Rocca asked, "Because the fictional president – and it comes up early in the book – is under threat of impeachment, how do you look back at your impeachment?"

"Well, I knew it wouldn't succeed," President Clinton said. "It wasn't a pleasant experience. But it was a fight that I was glad to undertake. They knew there was nothing impeachable. And so, we fought it to the end. And I'm glad."

It's been 20 years since President Clinton was impeached, then acquitted by the Senate.  But the repercussions reverberate to this day.

In this #MeToo age, some – including members of his own party, like New York SenKirsten Gillibrand – have said Mr. Clinton should have stepped down because of the Monica Lewinsky affair.

Rocca asked, "But since we're talking about that period, what did you think six months ago when Senator Gillibrand said, 'He should have resigned'?"

As for the investigation led by Robert Mueller swirling around the current commander-in-chief, Rocca asked, "Do you think that the press has been fair to President Trump?"

"I think they have tried by and large to cover this investigation based on the facts," Mr. Clinton said. "I think if the roles were reversed – now, this is me just talking, but it's based on my experience! – I think if it were a Democratic president, and these facts were present, most people I know in Washington believe impeachment hearings would have begun already."

"If there were a Democrat in power right now?"

"Yes. And most people I know believe that the press would have been that hard, or harder. But these are serious issues."

"You hear from Trump supporters who say, 'You know, the press slobbered all over President Obama, he could do no wrong. And now this guy can do no right. What gives, that there's a kind of whiplash?'"

"Well, they did treat him differently than other Democrats and Republicans," Mr. Clinton replied. "That was the political press."

Why?  "You know, I don't know. They liked him, and they liked having the first African-American president. And he was a good president, I think. I don't agree with President Trump's assessment of his service."

Nor do the authors agree with the current president's rhetorical style.

Rocca said, "President Trump -- this is just factual -- is fond of personal insults. I mean, he still refers to Mrs. Clinton as 'Crooked Hillary' in tweets."

Patterson said, "It's been effective for him. It's unbelievable that he became president. But he figured some things out. And I think most people do not like these tweets. They just wish it wouldn't go that way."

President Clinton said, "I don't like all this. I couldn't be elected anything now 'cause I just don't like embarrassing people. My mother would have whipped me for five days in a row when I was a little boy if I spent all my time badmouthing people like this."

Mr. Clinton, of course, thought he was going to be the first-ever First Husband. And he says he's reminded of 2016 and the divisions in the country whenever he goes for a walk:  "There's a Trump supporter here in town that I walked past his house with my dogs. He had a 'Lock her up' poster in his front window. And I said to him, 'If you're gonna do that to my wife, you make sure the prisons are comfortable, 'cause you're gonna have a lot of company of your supporters in there!' And you know what he said? 'Obama and Hillary started the second Civil War.'

"So, there's division. But underneath that, there's a core of fundamental decency that can be really skewed when people feel abused, left out, or looked down on."

From "The President Is Missing":

Yes, their new book is a thriller about a chief executive who's practically a superhero. But the 42nd President of the United States believes they have something deeper to say about why the office matters. "I want people to see the presidency as a job, and a hard one, and it matters who gets it," he said. "It matters how they do it. Which I hope was the subtext of this. That is, I hope it's really exciting to people, but I hope when they put it down, they think, 'You know, we got a good kind of government here; we don't want to mess it up."

And in the words of the fictional President Duncan: "May God bless the United States of America, and all who call it home."