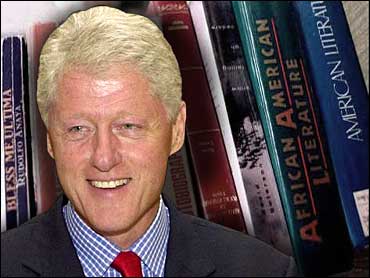 Ah, nothing like curling up in front of the fireplace with 21 of former President Bill Clinton's favorite books.

To coincide with the opening of a Clinton Library-related exhibit of books and gifts he received while president, Clinton has released a list of his 21 favorite books — from his wife's "Living History" to Ralph Ellison's "Invisible Man" to Thomas à Kempis' "The Imitation of Christ."

Clinton's presidential library is to open next November on the south bank of the Arkansas River in downtown Little Rock. A nearby office building, the Cox Creative Center, has hosted a number of preview exhibits, and on Monday opens "America Presents: A Collection of Books and Gifts of the Clinton Presidency." The exhibit runs through Jan. 3, 2004.

Copies of Clinton's 21 favorite books will be on display at the Cox building.

Besides Sen. Hillary Rodham Clinton's autobiography, Ellison's soaring novel of a black man's journey through white America and Kempis' 15th-century treatise on Christian living, other books of note include Maya Angelou's "I Know Why the Caged Bird Sings" and Thomas Wolfe's "You Can't Go Home Again."