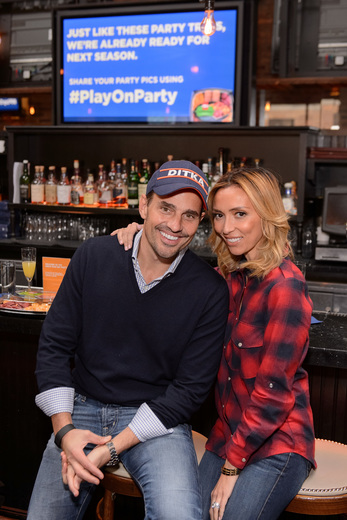 Bill and Giuliana Rancic had a major change of pace in 2015; Giuliana left her longtime position on "E! News," and the couple relocated to their new home in Chicago.

The couple say the move was definitely the right decision, not least of all because they are both huge fans of the Chicago Bears. The Rancics hosted the Hormel Gatherings Great Play-On Party for the Bears game on Sunday at Chicago bar Old Town Social, then jetted to Los Angeles for work.

We caught up with the candid couple on everything from their new city to Donald Trump to parenting.

You two were at the Hormel Gatherings party last night to watch the Bears game. You must be sad they didn't win.

Bill: Well it was our version of the Super Bowl. We're sad they didn't make it to the playoffs, but we enjoyed the game.

Giuliana: We had a lot of fun. Any reason to get together with friends, eat good food, have a good time and watch a game is fun, whether you win or lose.

What are your game day traditions?

Bill: Eating a lot. That's pretty much par for the course. I usually get out there on Sunday morning and go for a long run so I feel more justified later.

You two are big Bears fans and you recently relocated to Chicago. What's it like to be there?

Bill: We kind of get the best of both worlds since we're between Chicago and L.A., and we're spending more time in Chicago than we were before, so we're lucky to have both. It works great for us right now.

Giuliana: It's nice that in a 24-hour period we got to play in the snow with Duke and then play on the sand in L.A. I think it's great for him and his growth to give him those experiences. It's nice for us too because we have the best of both worlds. We're incredibly blessed and it's been really wonderful to live in Chicago the past several months. I'm not from Chicago, but it's an amazing city -- my favorite city in the world.

Giuliana, you left "E! News" in August. What have you been up to since? How is the transition?

Giuliana: It's been even better than I expected and easier. I wanted to leave "E! News" for about three years and we were trying to find the right time to do it. I felt so glad I did it after 14 years. It was so much fun but I needed to be challenged in different ways and I was lucky enough to build businesses throughout the years.

Day in, day out, I'm working on my clothing line for HSN, which has grown tremendously in the past three years. My wine called Xo, G is expanding into international territories. It's just been incredible period of growth in a short period of time and I've never felt more fulfilled in my entire life than I do in this very moment. I'm at home more, I can be with my family, yet I'm accomplishing more professionally and it's been a real blessing.

Bill, you used to work for Donald Trump. What kind of president do you think he'd be?

I think he'd be a great president, certainly. I've known him for 12 years, since 2003. He was incredible to me and changed my life. I give him a lot of the credit. If it wasn't for him, I wouldn't have met my wife and things would have been different for me. He gave me the opportunity of a lifetime. I got to watch him from the inside and I was able to see how he works and how he does deals and how he was able to negotiate in difficult times.

Giuliana, you've had a very public struggle with breast cancer. How is your health now? What do you do to stay healthy?

I'm well, everything's great, knock on wood. I'm almost at five years [since the diagnosis], which is very exciting and thankfully my health is great. I've never felt better. Bill always jokes that everyone's getting 24-hour flus, but -- knock on wood -- I'm always very healthy. What I do is basically every four months I do bloodwork and that's to make sure everything's OK. What's nice about what I did with the double mastectomy is that I don't have to keep doing it. I don't have to keep doing MRIs and mammograms, so for me it's a great decision and I'm very happy with it.

Now I enjoy life even more. I'm more adventurous, I have dessert every night and pretty much everything I want because you go through something like that and you realize life is short.

You responded to your critics who said you were too thin and said that you losing weight because of a cancer medication you were on. What was it like for you to have to respond to that and hear that kind of criticism?

You know, I kept hearing it and seeing it. I would do an awards show and look at my social media and so many comments were about my weight rather than the actual show itself. When I realized it was starting to cross into my work and started to be distracting from my work I realized, you know what, I have nothing to hide. I'm a very open and honest person. I've talked about infertility and breast cancer and that was something I had to address. I hoped that people would hear the reason and move on and when I was on the red carpet they wouldn't just be thinking about my weight the whole time and focus on my interviews with celebrities instead.

I think it just comes with the territory of working in Hollywood and that's okay. I'm happy I did it. A lot of women reached out to me and said, "Thank you for doing that."

I see the good in everything that happens. It's the only way to be and it works for me. I'm a very happy person. I love life and I realize that I'm very blessed. I have an amazing husband, amazing child, a beautiful family and I think so many of us wake up in the morning and see what we don't have and forget what we have. I never want to be one of those people.

You're both so busy with business ventures. How do you divide your schedule so you can spend time with Duke?

Bill: Our simple rule is family first. We don't negotiate or compromise that rule. It's as simple as it gets. We're lucky to have careers where we can incorporate family into what we're doing, like when we're on TV or working with restaurants, we're able to incorporate Duke, so it works out great.

Giuliana: Family is our priority -- that's for sure.

You two have been very open about your difficulties having a second child, and you two mentioned in the spring that you were considering adoption. Is that still a possibility?

Bill: I think at this point we're looking at all our options we're going down a couple of different paths. Hopefully we can get a brother or sister for Duke in the coming year.