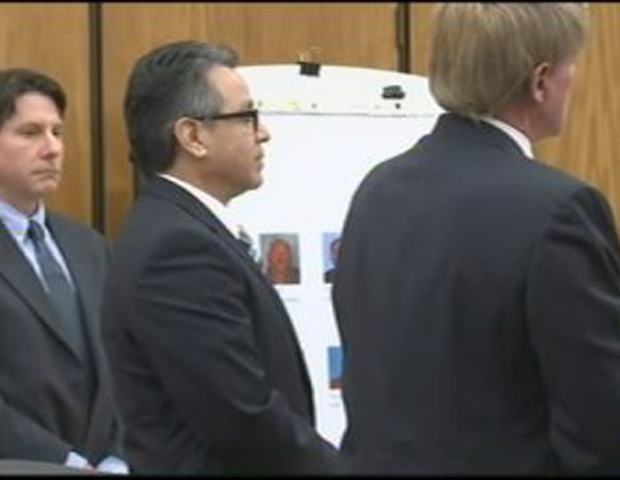 RENO, Nev. A biker gang leader was convicted of murder Wednesday in the 2011 killing of a Hells Angels member at a Nevada casino that authorities said was part of an orchestrated assassination plot to take out a high-ranking official of the rival group.

The Reno jury returned its verdict against Ernesto Gonzalez after deliberating for five hours. The same jury returns Thursday to decide the punishment for the former president of the Vagos chapter in Nicaragua, who faces up to life in prison without parole.

The jury convicted him on all seven felony counts tied to the death of Hells Angels San Jose boss Jeffrey "Jethro" Pettigrew during the casino shootout on Sept. 23, 2011.

Pinning all his hopes on an acquittal, Gonzalez told the judge earlier Wednesday that he wanted to take off the table the possibility of a lesser manslaughter conviction.

"It's either going to be one way or another, rather than meeting in the middle," defense lawyer David Houston told Washoe District Judge Connie Steinheimer. He said they were "specifically not asking for a manslaughter charge."

Steinhiemer described it as a "strategic decision" and asked Gonzalez if he agreed.

"Definitely, I do, yes," Gonzalez told the judge.

Gonzalez testified last week he was acting in self-defense to save the life of a fellow Vagos when he fatally shot Pettigrew during the melee at a Sparks casino on Sept. 23, 2011.

Prosecutors maintain Gonzalez shot Pettigrew as part of an orchestrated assassination plot approved by international leaders of the Vagos during their national convention at John Ascuaga's Nugget hotel-casino just east of Reno. He's seen on dark casino surveillance video coming around the corner of a fish-tank bar and shooting Pettigrew five times in the back as Pettigrew and another Hells Angel kicked a Vagos on the ground between slot machines.

Witnesses from both gangs — including one long-time Vagos-turned-federal informant who testified under a pseudonym — said Pettigrew was an "icon" who was considered the "Godfather" of the Hells Angels in San Jose and the fifth-ranking member nationally.

Chief Deputy District Attorney Karl Hall told the jury that Gonzalez can't argue self-defense because he was part of the gang that instigated the fight that led to Pettigrew's death.

Hall said the killing resulted from an ongoing rivalry between the gangs who were in Reno-Sparks for an annual biker festival.

"This is an organized attack," he said. "The purpose is to make a statement for the Vagos. He's on a mission go take out Pettigrew."

Rudnick testified against Gonzalez in a plea deal that saw his second-degree murder charge dropped to conspiracy to commit murder. He said Vagos leaders asked for someone to carry out a hit on Pettigrew and that Gonzalez volunteered.