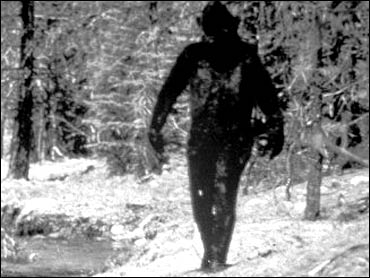 Whenever someone reports sighting the hairy beast of yore (details always fuzzy) or capturing the hirsute humanoid on film (images always grainy), it scares up a dubious debate of international proportions. Friday was just the latest episode in the Sasquatch show, as unreal as it may be.

Two men who claim to have stumbled across a Bigfoot corpse in the woods of northern Georgia indignantly stood by their story at a news conference in Palo Alto during which they offered an e-mail from a scientist as evidence and acknowledged they wouldn't mind making a few bucks from the "find" they have kept stuffed in a freezer for over a month.

"Everyone who has talked down to us is going to eat their words," predicted Matt Whitton, an officer on medical leave from the Clayton County Police Department.

Whitton and Rick Dyer, a former corrections officer, announced the discovery in early July on YouTube videos and their Web site. Although they did not consider themselves devoted Bigfoot trackers before then, they have since started offering weekend search expeditions in Georgia for $499. The specimen they bagged, the men say, was one of several apelike creatures they spotted cavorting in the woods.

As they faced a skeptical audience of several hundred journalists and Bigfoot fans that included one curiosity seeker in a Chewbacca suit, the pair were joined Friday by Tom Biscardi, head of a group called Searching for Bigfoot. Other Bigfoot hunters call Biscardi a huckster looking for media attention.

Biscardi fielded most of the questions. Among them: Why should anyone accept the men's tale when they weren't willing to display their frozen artifact or pinpoint where they allegedly found it? How come bushwhackers aren't constantly tripping over primate remains if there are as many as 7,000 Bigfoots roaming the United States, as Biscardi claimed?

"I understand where you are coming from, but how many real Bigfoot researchers are out there trekking 140,000 miles a year?" Biscardi said.

Biscardi, Whitton and Dyer presented what they called evidence supporting the Bigfoot theory. It was an e-mail from a University of Minnesota scientist, but all it said was that of the three DNA samples sent to the scientist, one was human, one was likely a possum and the third could not be tested because of technical problems.

At least one other Bigfoot researcher, Idaho State University anthropologist Jeffrey Meldrum, called the trio's claims "not compelling in the least." He told the Scientific American that photographs posted on the Web site "just looks like a costume with some fake guts thrown on top for effect."

Whitton and Dyer have offered three different accounts of how they found the beast's remains.

In early videos, the animal was shot by a former felon, and the men followed it into the woods. In a second version, they found a "family of Bigfoot" in the north Georgia mountains. In the third, the two were hiking and stumbled upon the corpse with open wounds.

In one of their YouTube videos, they are shown speaking with a man they identify as a scientist. Earlier this week, they admitted that the man was Dyer's brother. Dyer said they were simply having fun.

Asked why anyone should believe his claims when he already had shown a flair for tomfoolery, he suggested that skeptics simply are jealous.

"They don't have a choice to believe us. We have a body," Dyer said.