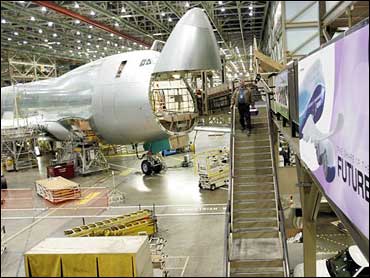 It was a good year to sell airplanes, so good that The Boeing Co. sold dozens even while most of its commercial assembly workers were on strike.

Airbus SAS has had a stellar year, too, but Boeing remains on track to sell more planes than its archrival for the first time in five years.

By the end of November, Boeing had won 800 orders, more than any year in nearly two decades, and more than the previous three years combined. Airbus sold 687 planes during the same period, up from 370 in 2004.

Regardless of what happens in the final weeks of the year, Boeing has made up so much ground, some analysts are predicting it will reclaim its title as the world's No. 1 airplane manufacturer within the next few years.

"If these trends continue, it's going to be 60-40 in favor of Boeing by the end of the decade, and there's even a possibility of a two-thirds, one-third split," said Richard Aboulafia, an aerospace analyst with Alexandria, Va.-based Jupiter Research.

Airbus isn't about to step aside.

"This is a marathon, not a sprint," said Clay McConnell, a spokesman in the North American office of Toulouse, France-based Airbus.

Narrow-body jets have been the hottest sellers for both companies, but industry watchers have paid more attention to the long-range Boeing 787 and Airbus' competing A350. They're at the center of a heated dispute before the World Trade Organization, though analysts say that's been political background noise, nothing that's factored into airlines' buying decisions.

Rising fuel prices have been a much more pressing concern. That's worked out well for Boeing, since fuel efficiency is a key to its sales pitch for the 787. The so-called Dreamliner had won 185 orders through the end of November, compared to 49 for the A350. The planes are scheduled to enter service in 2008 and 2010, respectively.

Owned mostly by the European Aeronautic Defense & Space Co., Airbus said it's behind simply because Boeing had a two-year head start.

"Over the life cycle of that airplane, we're absolutely confident we're going to get 50 percent or more," McConnell said.

Some critics counter that the 787 is a better plane. Though Airbus markets the A350 as a virtually all-new jet, some analysts argue it's more like a remake of the A330.

Scott Hamilton, an analyst with Leeham Co. LLC in east suburban Seattle, said an extra 15 inches of elbow room in the 787's fuselage will make it more comfortable than the A350.

Airbus suggests the 777 has done better because Boeing has offered steep price cuts.

"There was some very generous pricing done on the 777s," McConnell said. "The A340 models that we continue to produce are great airplanes. A lot of airlines love flying it."

Boeing spokesman Peter Conte said he could not comment on pricing, but argued that the twin-engine 777 has been popular because it burns less fuel than the four-engine A340.

Airbus hasn't won many orders this year for its superjumbo A380, which will overtake the 747 as the world's largest commercial jet when it enters service next year. After production delays ticked off several airlines, it won only 10 orders through the end of November.

Meanwhile, Boeing announced last month that it's launching the 747-8, a more fuel-efficient version of the double-decker plane, to compete with the A380.

Boeing will have to ramp up production to make good on this year's flood of orders. It ran into problems in the late 1990s, when it was trying to triple production of the 737 line while introducing a new version of the plane. In some cases, planes were going through the assembly lines faster than suppliers could send parts.

Paul Nisbet, an analyst with JSA Research, said be believes executives at Chicago-based Boeing when they say they learned from their mistakes and won't make them again.

Delays caused by the Machinists' strike in September forced Boeing to drop its delivery forecast to 290 planes this year, down from 320. Airbus has said it will deliver 370 planes this year. It's expected to beat Boeing on deliveries for the next few years, since it won more orders from 2000-2004.

Most industry experts predict a neck-and-neck race for orders and deliveries over the next few years.

Regardless of which company comes out on top, Nisbet predicted neither will win as many orders in the coming years as they did this year.

"I would be very surprised if it comes anywhere near this in the next two or three years," Nisbet said.