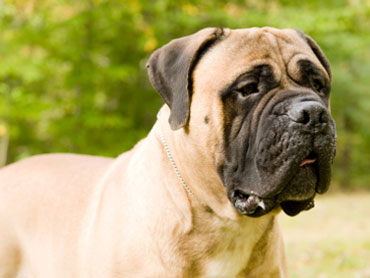 Large breeds of dog can be tons of fun, but they're not for everyone.

The gentle giants can be great companions, but of course need plenty of space.

On "The Early Show" Friday, resident veterinarian Dr. Debbye Turner Bell went through the advantages and disadvantages of owning one - factors you should consider before making one a member of your family, then looked at five of the more popular big breeds:

As a rule, the larger the dog, the shorter his lifespan. Unfortunately, many giant breed dogs just don't live a very long time. Many of the large breeds tend to develop serious health problems -- cancer, heart problems, not to mention problems with joints and bone deformities.

Many giant breeds are what is known as "deep-chested." Deep-chested dogs often develop heart problems, or cardiomyopathy, in their lifetime.

Large breed dogs grow very quickly during puppyhood. Feeding the right diet and the right AMOUNT is critical for the health of the dog. Over-feeding a large breed puppy can lead to serious bone and joint deformities.

Over-exercising a large breed puppy in the first two years of life can cause great harm to the dog's developing joints and bones.

Also, large breeds should be fed from an elevated bowl, rather than a bowl on the floor.

Bernese Mountain Dogs are from midland regions of Switzerland. Used as a companion and watchdog to farmers, he let farmers know of unknown and unwanted intruders. They also were used in draft work, pulling carts in the mountainous region.

Berners are tri-color. A black body with rust and white markings on the face, chest and legs.

Berners are alert, good-natured dogs but may tend to be wary of strangers. They are easy to train, good with children, and a natural watchdog.

Berners tend to have a very short lifespan due in large part to the advent of cancer in the breed. The typical lifespan is only 6-8 years.

These dogs have a thick, heavy coat and need frequent brushing. They prefer cold temperatures because of all that hair. And will shed a lot.

Newfies are friendly, gentle dogs. They are very loyal to their human.

They are good with children and other dogs.

Were bred to help fishermen off the coast of Newfoundland. The dogs would retrieve nets, boat lines, even people who fell overboard. They have been called the "St. Bernard of the water."

Have webbed feet, a double, heavy coat, and are strong swimmers.

Can be black, black with blue or white markings, brown, gray and white with black markings.

Newfoundlands are droolers! Especially watch out for flying spit after one has had a drink of water.

Newfies are a challenge to train. They require a firm, persistent, calm approach.

Surprisingly, for their size, Newfoundlands don't eat much. About the same amount as a Labrador Retriever.

Are prone to a heart problem called sub-aortic stenosis, and hip dysplasia.

Live an average of 10 years.

These dogs should be brushed daily (at least weekly) to prevent problems with matting and skin infections.

Irish Wolfhounds are a sight hound which means they hunt their prey by sight (as opposed to smell as do many other dogs). They were bred to hunt small prey like rabbits. In ancient times, they were used to hunt wolves (hence their name), elk, deer, boar, and used as war dogs.

These are tall, lanky dogs with a sleek frame and scraggly "hairdo." They are one of the tallest dog breeds.

They can be gray (most common), brindle, red, black, white and fawn

They are very friendly animals. Irish Wolfhounds like almost everyone, so they do not make a good watchdog.

Irish Wolfhounds only live an average of 6-8 years.

They are "double-coated" and need daily or at least weekly brushing.

Because of their height and size, they need plenty of living space. This goes for the car they ride in too.

Also known as Old English Mastiff, developed in England. The British used them to guard estates and castles. They were used as war dogs and used to fight wild animals such as tigers, and bears)

Are good family dogs, therapy dogs and guard dogs. Mastiffs are natural guard dogs and will corner or pin an intruder if danger is sensed. Some can be aggressive toward other dogs. However, most Mastiffs have a gentle nature.

They do generate a lot of saliva (slobber). It is a good idea to keep towels close by to wipe your Mastiff's face after he eats and drinks.

These dogs grow fast in the first year of life. As their bones and joints develop, it is important not to over-exert your Mastiff with too strenuous exercise.

Even though Mastiffs have a relatively short coat, they do shed. Regularly brushing will help tremendously cut down on the amount of dog hair on you, your furniture, and carpet.

Despite their size, Mastiffs should be kept indoors and close to his human family. They thrive of social interaction and connection to their humans.

Mastiffs can be very resolute and stubborn. Training them requires patience, diligence, and determination.
Mastiffs are the foundational breed for St. Bernards, Chow Chows, and pugs.

Mastiffs do not need a lot of yard to run. They only need moderate exercise.

For more: Mastiff Club of America

Great Danes are known as "gentle giants." They are naturally affectionate, social, and patient. They are regal, elegant dogs known as the "Apollo of all dogs."

Males can weigh up to 200 pounds, females can reach 130 pounds

They live up to 10 years, but often less.

Despite their name, Danes are not from Denmark. They are seen in Greek, Egyptian, and Chinese history.

It is important to obedience train Danes. They are such large dogs, it is imperative that you can maintain control of them at all times

Because most of these breeds are at risk of bloat, several smaller meals should be given throughout the day, instead of one large meal.