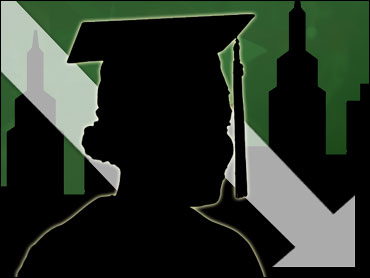 Seventeen of the nation's 50 largest cities had high school graduation rates lower than 50 percent, with the lowest graduation rates reported in Detroit, Indianapolis and Cleveland, according to a report released Tuesday.

The report, issued by America's Promise Alliance, found that about half of the students served by public school systems in the nation's largest cities receive diplomas. Students in suburban and rural public high schools were more likely to graduate than their counterparts in urban public high schools, the researchers said.

Nationally, about 70 percent of U.S. students graduate on time with a regular diploma and about 1.2 million students drop out annually.

"When more than 1 million students a year drop out of high school, it's more than a problem, it's a catastrophe," said former Secretary of State Colin Powell, founding chair of the alliance.

"It's essential that we fix this system and get more kids that are coming out with high school degrees to go into technical schools, community colleges and go into college, if America is going to stay in the forefront of this globalizing world," Powell told CBS News anchor Katie Couric.


Entertainer and activist Bill Cosby and Dr. Alvin Poussaint, professor of psychiatry at Harvard Medical School, co-authored "Come on People: On the Path from Victims to Victors." Both discussed the dropout rate report with Early Show co-anchor Harry Smith Wednesday. Poussaint called the situation "a catastrophe. ... Many of these schools are in the inner-city and are made up of blacks and Latino students who are not graduating at great rates. This increases the level of poverty, it increases crime, it increases the incarceration rate. Eighty-percent of inmates are high school dropouts in the United States. It's really a drag" on the economy. Cosby said the response to the report should be "an outcry and an out-movement." To read an excerpt of "Come on People," click here. To see the interview,
click here
.
His wife, Alma Powell, the chair of the alliance, said students need to graduate with skills that will help them in higher education and beyond. "We must invest in the whole child, and that means finding solutions that involve the family, the school and the community." The Powells' organization was beginning a national campaign to cut high school dropout rates.

The group, joining Education Secretary Margaret Spellings at a Tuesday news conference, was announcing plans to hold summits in every state during the next two years on ways to better prepare students for college and the work force.

The report found troubling data on the prospects of urban public high school students getting to college. In Detroit's public schools, 24.9 percent of the students graduated from high school, while 30.5 percent graduated in Indianapolis Public Schools and 34.1 percent received diplomas in the Cleveland Municipal City School District.

The new report says Chicago's graduation rate is 51 percent - better than the worst but far short of what the city says is its goal, reports CBS News correspondent Dean Reynolds.

"There's no acceptable dropout rate any more. Zero is what our goal has to be," says Arne Duncan, CEO of Chicago Public Schools.

"We do see dropout and graduation rate reports on a monthly basis, and they vary wildly," he said. "We know from previous reports that students who transfer or are even deceased are listed as dropouts."

Detroit Public Schools is working on its own report of graduation rates and had no statistics available that reveal where they compare to the national report.

Researchers analyzed school district data from 2003-2004 collected by the U.S. Department of Education. To calculate graduation rates, the report estimated the likelihood that a 9th grader would complete high school on time with a regular diploma. Researchers used school enrollment and diploma data, but did not use data on dropouts as part of its calculation.

Many metropolitan areas also showed a considerable gap in the graduation rates between their inner-city schools and the surrounding suburbs. Researchers found, for example, that 81.5 percent of the public school students in Baltimore's suburbs graduate, compared with 34.6 percent in the city schools.

Ohio Department of Education spokesman Scott Blake said the state delays its estimates by a few months so it can include summer graduates in its calculations. Based on the state's methodology, he said Columbus graduated 60.6 percent of its students in 2003-2004, rather than the 40.9 percent the study calculated.

By Ohio's reckoning, Columbus has improved each year since the 2001-2002 school year, with 72.9 percent of students graduating in 2005-2006, Columbus Public Schools spokesman Jeff Weaver said.

Weaver said the gains were partly because of after-school and weekend tutoring, coordinated literacy programs in the district's elementary schools and bolstered English-as-a-second-language programs.

Spellings has called for requiring states to provide graduation data in a more uniform way under the renewal of the No Child Left Behind education law pending in Congress.

Under the 2002 law, schools that miss progress goals face increasing sanctions, including forced use of federal money for private tutoring, easing student transfers, and restructuring of school staff.

States calculate their graduation rates using all sorts of methods, many of which critics say are based on unreliable information about school dropouts. Under No Child Left Behind, states may use their own methods of calculating graduation rates and set their own goals for improving them.

The research was conducted by Editorial Projects in Education, a Bethesda, Md., nonprofit organization, with support from America's Promise Alliance and the Bill & Melinda Gates Foundation.

The alliance is based on a joint effort of nonprofit groups, corporations, community leaders, charities, faith-based organizations and individuals to improve children's lives.

The goal is to increase adult and student interaction, Wasko said.

"We do know from national studies that smaller school communities do work," he said. "Students become more engaged."

Officials hope to implement the plan by next fall.