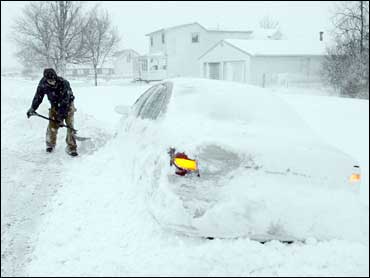 Meanwhile, double-digit subzero temperatures kept Wisconsin in the deep freeze Monday, closing hundreds of schools and day care centers because of the dangerously cold weather. At least 20 Twin Cities charter schools in Minnesota also called off classes for the day.

Temperatures across northern Minnesota and eastern North Dakota were still in the 20-below zero range. There was also a wind chill warning in the Chicago area, where the combination of temperature and wind felt like minus-35.

Just before 7 a.m., the temperature at the Worcester and Pittsfield, Mass., airports was 1 degree above zero, with a wind chill index of 17 below zero. Boston's Logan Airport reported a tropical 10 degrees, with a wind chill of 12 below.

In Massena, near the Canadian border, 15 mph winds made it feel minus 25 while in Binghamton, near the Pennsylvania state line to the south, it felt like 24 below zero. New York City was registering wind chills of minus 8 to minus 11 Monday morning.

Crews in Detroit were fixing dozens of water main breaks blamed on the harsh winter weather.

"Brrrrrrr! It's cold outside," Kathy, a waitress at the Perkins restaurant in Hudson, Ohio, about 30 miles south of Cleveland, told CBS Radio News Monday morning. "You walk outside, and your fingers are numb almost immediately."

Low temperatures will continue across the Midwest and Northeast, with daytime high temperatures likely to stay below zero in the coldest areas.

Lake-effect snow and frigid winds created problems throughout the day on Sunday south of Buffalo and across the state in the Watertown area. Some towns south of Buffalo reported two to three feet of snow by Sunday evening. In northern New York, 24 inches of snow was measured in Watertown.

"Roads are treacherous. We have our DPW and our highway departments out, and they can't keep up," said Terry Yarnell, superintendent of the town of Aurora.

"It's coming down too quick, they just can't keep up with it," agreed Steve Slawinski, assistant police chief of Evans, N.Y. "If you go out, you're just going to go in a ditch or get in an accident."

The Thruway was shut down in both directions for 38 miles in western New York from Lackawanna to Dunkirk Sunday afternoon because visibility was close to zero and trucks were jackknifing, said senior dispatcher George Lindell. It was reopened later Sunday, only to be closed again around midnight. The highway was reopened around 3 a.m. Monday. No major accidents were reported.

Amtrak announced Sunday evening that Empire Service trains would not run between Niagara Falls and Albany on Monday, but bus service would be arranged. Amtrak's Lake Shore Limited service between Chicago and Albany also was cancelled.