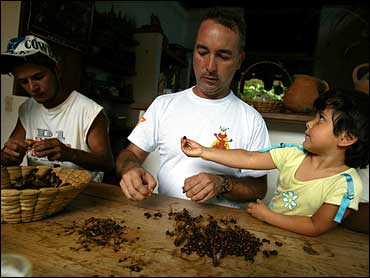 The first loud crackle tastes and feels like popcorn, but by the time the juices spray wildly in your mouth and the filament-like legs slide down your throat, there's no mistaking this toasted ant queen.

The people of sun-soaked northern Colombia have been eating ants for centuries. They believe the accurately named "hormiga culona" — or big-butt queen ant — is everything from a natural form of Viagra to a protein-rich defense against cancer.

Now the invertebrates are going global: A businessman in Santander province exported more than 880 pounds of the inch-long queen ants last year, many of them to be hand-dipped in Belgian chocolate and sold in fancy packaging at $8 for a half dozen at upscale London department stores like Harrods and Fortnum & Mason.

But even as the delicacy begins to expand beyond Colombia, the ants appear to be dwindling in Santander — and that worries the region's ant-eating bipeds.

This year's harvest, which usually begins around Easter and lasts as late as June, was one of the worst on record, with peasants in the artist colony of Barichara reporting half their normal year's haul.

Entomologists say the winter was unusually harsh and spring rains were late, which may have disturbed the virgin queen ants' nuptial flights — the one time a year when they emerge from their dune-like ant hills to seek a mate and form a new colony. Almost as often, the queens are grabbed by lizards, birds or humans.

Expanding fields of beans, tomatoes and tobacco also have replaced the region's last remaining wilderness and farmers consider the leaf-cutting ants — the species atta laevigata — to be serious pests.

"It's an age-old dilemma for the farmer — should I kill it or eat it?" said Andres Santamaria, who was given a $40,000 grant from Santander's government to develop an environmentally sustainable, export-oriented program for breeding the ants.

Whatever the local conditions, overseas demand by itself won't endanger the ant supply, say those involved in the trade.

"We're never going to eat Colombians out of their ants," said Todd Dalton, a 30-year-old chef in London whose yen for the exotic dish led him to create Edible, a novelty food brand whose products are not for the squeamish.

Last year, Edible sold some 220 pounds of the ants, most of them dipped in chocolate, along with other specialties like lollipops with scorpions inside.

In Colombia, people generally toast the ants in salt at community gatherings and eat them as a snack. But there is innovation. Restaurants in Barichara offer an ant-based spread for bread and an ant-flavored lamb sauce.

Stuffed tortilla "atta wraps" led the menu at a recent tasting at the Montreal Insectarium, an insect museum in Canada.

"In France, they're so highly regarded people started calling them the caviar of Santander," said Stephane Le Tirant, curator at the Montreal Insectarium.

During harvest time in Santander, ants by the bagful are sold at almost every roadside stop. But although relatively abundant, they're not cheap — costing as much as $24 for about two pounds.

The culona is a source of regional pride, its image gracing everything from the logo of a long-distance bus company to the provincial La Culona lottery. It also connects locals to the province's indigenous past, when ants were a part of a complex mating ritual of the Guane Indians.

Rising demand from the outside has helped push up prices that peasant harvesters are getting.

"A few years ago they cost half as much," said Hernando Medina, the province's main exporter.

Not everyone is cashing in. Jorge Raul Diaz maintains 37 ant colonies on a small farm outside Barichara, but in homage to native culture, he gives them away.

During last year's harvest, he organized the first culona-gathering contest, in which 22 participants competed over two months to see who could bag the most insects.

She no longer eats the ants, because of a near toothless mouth, but Rondon says she eagerly awaits the yearly hunt, when she scrambles about on hands and knees while ants crawl up and down her legs.

"Whenever the culonas come out," she said, "I'm there the first day."
JOSHUA GOODMAN