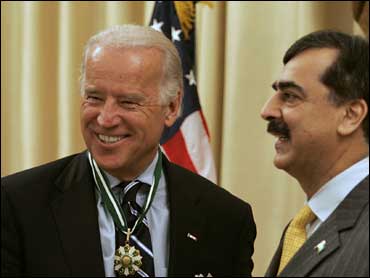 Vice President-elect Joe Biden on Friday met with Pakistani leaders during an Asian trip meant to show the new administration's interest in the troubled region.

In a statement, Gilani said he pressed upon Biden the importance of greater U.S. aid to improve Pakistan's military capacity. Biden has spearheaded legislation to increase humanitarian spending in Pakistan but that also links military aid to Islamabad's performance in the fight against militants.

Gilani also said the two countries should share more intelligence so Pakistan could go after militant targets on its own, removing the need for U.S. missile strikes on its territory. Pakistan routinely condemns such strikes by the U.S.

Biden aides did not disclose their schedule for security reasons, but the public descriptions of the trip suggested destinations such as Afghanistan, Pakistan and India. The United States has a strong interest in the stability of Pakistan's weak civilian government because it is considered an ally in the region.

Biden traveled in his role as a U.S. senator from Delaware. He takes office as vice president on Jan. 20 but has not yet resigned his Senate seat. Aides said Biden took the trip now because an official White House trip would take months to organize.

Biden's trip just days before becoming vice president was a clear signal that President-elect Barack Obama's new administration plans to make an immediate priority the battle against al Qaeda and Taliban militants operating along the Pakistan-Afghan border. U.S. officials worry that a conflict with India could distract Pakistan from eliminating militant sanctuaries along the Afghan frontier, and have urged India and Pakistan to cooperate.

Mr. Obama's national security team suggested the visit to help the new administration get an on-the-ground sense of the situation in those countries.

Biden, who is chairman of the Senate Foreign Relations Committee, had planned to travel with Sen. John Kerry, D-Mass., the incoming chairman of committee, and Sens. Jack Reed, D-R.I., and Susan Collins, R-Maine. Those three bowed out of the group, citing Senate votes scheduled this weekend.

Biden was sworn in for a seventh term Tuesday, a move similar to what Lyndon Johnson did while in the same situation in 1960 when he also was vice president-elect. Edward Kaufman, Biden's chief of staff for almost two decades, was appointed to fill the seat when Biden resigns.

The state-run Associated Press of Pakistan said Zardari bestowed an award on Biden, the "Hilal-i-Pakistan," to recognize the veteran politician's "consistent support for democracy and socio-economic development in Pakistan and for his outstanding contribution to the strengthening of U.S.-Pakistan relations."