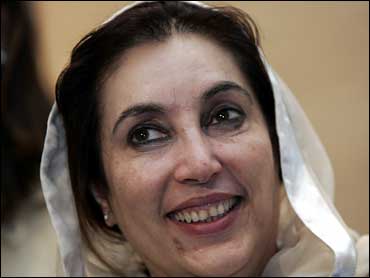 Former Pakistani leader Benazir Bhutto said Saturday that power-sharing talks with President Gen. Pervez Musharraf had stalled, but that she planned to return to the country very soon.

Bhutto told a news conference in London that no agreement had been reached due to opposition from members of the ruling regime to working with her Pakistan People's Party.

However, she said it was important that she end her exile and return home. Her party will announce the date on Sept. 14, she said.

"I will be going back to Pakistan very soon, but the date is going to be announced from the soil of Pakistan," Bhutto said.

She did not give details of what specifically had stalled the talks aimed at shoring up Musharraf's fraught re-election bid and allowing her to return to Pakistan to contest parliamentary elections.

However, she has yet to win a public commitment from Musharraf on two critical points - that he would step down as army chief and give up the power to dismiss the government and parliament.

"We understand that there is severe reaction within the present ruling party to any understanding with the Pakistan People's Party," she said. "Due to that reaction no understanding has been arrived at and we are making our own plans to return to the country."